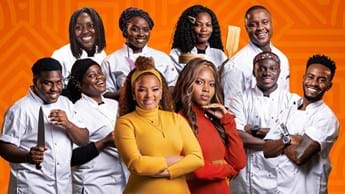 DStv has a dazzling variety of new local series this week, as well as brand-new episodes of our favourite homegrown telenovelas.

Ghosted Africa explores why individuals abruptly ended all contact with loved ones and folk they were dating. Local lifestyle channel Honey (DStv channel 173) has some new shows, too including the romantic Wawu, That's My Dress: Zambia and Guess The Dress, along with reality competition series House of Chefs and Hair Knockout.

And the drama goes to another level in telenovelas Legacy as Dineo fights to reclaim her company, Lingashoni as Seipati fights to stay in the city of gold, and DiepCity where the search for Smangaliso looms

Host Sheila Gashumba guides eight talented young chefs from seven countries across Africa as they compete for a coveted internship with celebrity chef Siba Mtongana and a cash prize.

Hosts Shamiso Mosaka and Oros Mampofu help distraught individuals to track down and confront a former lover, friend or family member in an effort to uncover the truth of why they cut off communication.

Adeola Ariyo hosts this fast-paced hairstyling competition. In each episode, two of Africa’s most talented and creative stylists enter a boxing ring to take down the competition.

Friends and family help a bride to find her dream wedding dress at a boutique. Out of four options, the groom guesses which one his bride will pick. If he’s right, he wins them a cash prize.

A Zambian boutique becomes the new hotspot for a bride who is looking for the perfect dress for her wedding day. The in-house team is ready to help each bride and her entourage to find The One.

It’s the last roll of the dice for Dineo, Angelique and Elizabeth as they try to get control of Legacy back, the past sneaks up on Charmaine, and Felicity barters her soul in a plot to stop James.

Seipati fights to stay in Johannesburg and she has an ace up her sleeve, the Mchunu brothers make a deal with Papi and Puleng, and Mandla takes a stand and vows to uncover the truth about the wedding.

Lerato desperately searches for Smangaliso, the girls struggle to come up with a way to clear Themba without incriminating themselves, and Warrant Officer Cele is hot on the heels of the girls – will they evade him?

When a businessman faces pressure from his mother to produce a grandchild, he decides to take his domestic worker as a second wife.