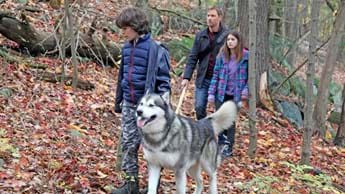 DStv is going to knock your kids’ little socks off this week.

M-Net (DStv channel 101) delivers a family-friendly live action animal adventure with Against The Wild: The Journey in its Saturday kids’ movie slot, there are brand-new episodes and seasons of kids’ shows like Jungle Beat, Amphibia and Side Hustle.

And with the Paw Patrol movie coming to cinemas from Friday, 20 August, the pups are taking over the small screen, too!

Against The Wild: The Journey

An epic canine adventure in which Chinook the Alaskan Malamute must lead a shipwrecked blind man out of the wilderness, while the man’s children launch a rescue mission of their own. Starring Natasha Henstridge and Steve Byers.

An adventurous island princess and an ancient Demigod go on a quest to save her home. Starring Dwayne Johnson, who shows off his vocals in this beautifully animated Disney adventure.

A memory mix up leaves Supergirl, Wonder Woman and Batgirl with no idea of the wicked deeds they supposedly did. Who’s been meddling with their minds?

Wonder Woman, Batgirl, Supergirl, Bumblebee and the Super Crew must combine their powers to battle evil whenSiren steals the Book of Legends from Super Hero High in order to locate the Trident of Atlantis.

At Super Hero High, Wonder Woman, Supergirl and their Super Hero friends attend exciting classes and deal with the awkwardness of growing up. In new episodes, Batgirl finally gets the chance to be Batman’s sidekick.

The jungle animals, including Munki, Trunk and Tallbert, are disturbed by the arrival of three human explorers – Simon, Rita and Mirabelle – and their puppy, so they do their best not to be seen throughout the season.

6-year-old Nancy is excited to experience what the world has to offer with her friends. In S2, a neighbourhood climbing tree is declared off-limits, and Nancy and her friends take a stand against it.

Animated series about teen Anne Boonchuy, who is magically transported to a marshland full of frog people. In new episodes, Sprig and Polly stay up all night to drive the family home, and the Plantars make it to Wartwood.

In the new episode, Mr. Prusko is the most boring teacher in school. Students even fall asleep in his class, so Lex and Presley make a deal to make him cooler in exchange for good grades.

Santiago of The Seas S1

In new episodes, Santi and the crew will have to team up with a pirate puppy to stop Bonnie Bones and save an old friend, and Enrique’s new gold-digging machine threatens Lorelai’s home.

The Marvellous Makes workshop showed you all sorts of projects you could form with modelling clay. Now the Makes lab will show you experiments that you can perform at home using ordinary household goods.