Take a look back at your favourite singles' journeys to find love on the local version of the internationally popular reality series, Love Island. 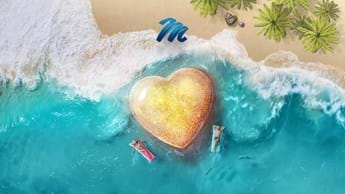 Viewers were hooked to M-Net for two months of complicated love triangles, messy break-ups, and of course, unexpected hook-ups that resulted in genuine romantic connections as the first season of the South African edition of the global reality sensation that is packed full of drama.

10 attractive, bubbly and chic singles arrived at a luxury villa at a Cape Town wine estate searching for romance. Just when the couples were developing feelings for each other, their bond was put to the ultimate test. New arrivals, known as bombshells, came flying in to tear them apart – or host Leandie du Randt would instruct the Islanders to recouple.

Throughout the season, an episode would end in a surprise elimination, which would then lead to tears, and some of the Islanders scrambling to form ties just to stay in the game.

One of the highlights of the season was during the fifth recouple (between episode 26 and 27) when 4 Islanders – Chris Mouton (21), Summer Da Cruz (21), Thiala Beyleveld (21) and Josh Mimbulu (23) – were voted out of the villa. In a twist of events, Kitty Kearney (19) decided to follow her heart and leave with Chris despite the fact that they’d known each other for only a couple of days. They dated for a few days on the “outside”, but Kitty and Chris called it quits shortly thereafter.

Here is a recap of the final four couples’ journey to the finale:

When self-proclaimed hopeless romantic and personal trainer Asad Boomgard (24) and social media influencer Millie Terblanche (20) were introduced in the first week, they established that they weren’t attracted to each other. So, they built a solid friendship and pursued connections with other Islanders. However, their individual bonds failed and ended in heartbreak, especially for Millie, who fell head-over-heels with rugby player Xavier Haupt (21), only to have him dump her the second that entrepreneur Mischka Dhuloo (23) arrived. While Millie was devastated, it didn’t take too long for her to move on and kiss Asad during a sultry dance challenge. To her amazement, he reciprocated her feelings.

While Asad and Millie’s spark wasn’t instant, they ended the season on the same page and learnt to care about each other – deeply. “I haven’t been this happy with a guy for a very long time,” Millie said during her conversation with Asad about their future together.

While there’s mutual respect and chemistry between Xavier and Mischka, the odds were stacked against them when he decided to end his relationship with Millie. Sure, the nature of Love Island SA is to create connections with as many people as possible, but Xavier announced that he was in love with Millie, then retracted his statement following a conversation with Mischka. “I did say that [I love you] but as time went on, I just didn’t feel in love anymore, and I should’ve been more honest with you,” explained Xavier to a weeping Millie.

Xavier’s actions saw him and Mischka in the bottom three a few too many times during elimination ceremonies. However, they continuously expressed their interest to continue their relationship on the outside.

The show’s longest-standing couple, model Libho Geza (23) and massage therapist Thimna Shooto (26), were ahead of the pack as fan-favourites. They even had a hashtag that occasionally trended on social media: #teamLimna. Since laying eyes on each other, they were open and honest with each other. Libho consistently treated Thimna like a queen and he never got tired of making her feel special, whether it was by preparing breakfast for her or picking her up when she walked in heels.

What sets art student and model Ross Marshall (20) and entrepreneur Tania Kera’s (23) bond apart is that they aren’t only transparent with each other, but they have a friendship that is filled with plenty of banter. In simple terms: They get each other. They both wear their hearts on their sleeves, which makes them relatable as they don’t hold back. However, Ross was initially attracted to Thiala and when she left the villa, he mentioned out loud that he would be open to rekindling his bond with Thiala on the outside, which means that he could drop Tania after they leave the villa.