Watch Doubling Down with the Derricos on DStv

What’s new in Doubling Down with the Derricos S2

Deon and Karen Derrico talk about the new season of Doubling Down With The Derricos. Watch it now on DStv 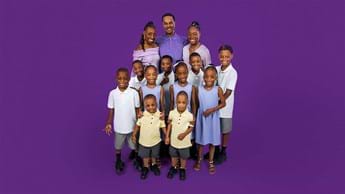 Karen and Deon Derrico are super-parents. During the first season of their TLC (DStv channel 135) reality series Doubling Down With The Derricos, Karen gave birth to triplets Dawsyn, De’Aren and Dyver (who’re now 1 and a half years old). They joined the 11 other Derrico kids – 15-year-old Darian, 10-year-old Derrick, 9-year-old twins Dallas and Denver, 7-year-old quintuplets Deniko, Dariz, Deonee, Daiten and Daician, and 4-year-old twins Diez and Dior (originally triplets but the third baby, Carter, died shortly after birth). If you ran out of fingers part way through that, that’s 14 kids in total.

Estate agent Deon Derrico is the family breadwinner and cook. And Karen has a full-time, never-ending job at home raising all the children, home-schooling and running the household with breath-taking efficiency. Everything is organised and labelled, down to the children’s toothbrushes.

We spoke to Karen and Deon about some fun moments in the new season of their show, self-care, black history, organising 14 birthdays a year, parenting during COVID, a health crisis...and what their fantasy house might look like.

Watch Doubling Down With The Derricos Watch TLC

Welcome to the Derrico household!

How do you go about organising birthday parties for 14 children?

Karen: This is one of the easier things because that’s ready right up my alley of decorating and stuff. So the children’s birthdays, we have one in May and then from July down to December, we are busy and booked with birthdays, because although they’re all multiples, they’re still individuals. So I just have a lot of planning to do. I’m definitely busy with birthday parties, and every year it gets bigger and bigger because the demands grow.

How have the kids reacted to COVID and social distancing?

Deon: Well, they’re home-schooled. It does help a lot that we are such a large family. The things that maybe a parent or parents of a single child or even 2 children have faced, we haven’t really faced, which has been a blessing. There’s so many of them, they’ve been able to enjoy each other that way. I don’t think it has affected them the way it probably has many of our children in the world. We haven’t, of course, been able to go out as much as we ordinarily would do, going out and interacting, letting them play outside and things of that nature. We haven’t been able to do that as much.

One of the things we’re really looking forward to this season is seeing the kids dress up for Black History Month. Can you tell us a little bit about how you discussed that behind the scenes?

Karen: With everything going on with George Floyd and Breonna Taylor, one of the things that as a parent you want to do is talk to your children about their culture, their ancestors, their family.

Right now, Black History Month in our culture is at a major high and my children see that. I don’t want it to be ignored with them looking at that. So I wanted to make Black History Month more of a current events thing this year. I wanted the children to be able to ask questions and express how they feel and, more importantly, have a clear understanding of what is going on and how it will affect them. And how what the past African American greats, like Dr. Martin Luther King and Rosa Parks, did has made a great change so far.

So with that, when we sat down and talked about it, I asked Deon first, and then I educated them on who we’re going to go with and then I picked the person for each of the children. It was so great, because now when they’re looking at former President Barack Obama, all of them are excited. They’re like, “Hey, I know who that is!” They all thought it was fun, they learned so much about it. I’m so glad that I was able to incorporate the new things that are going on and some of the past events, and for them to learn about their culture.

That’s one thing that my mother emphasised with us, knowing where you came from, so you can understand where you’re going.”

Deon: So the thing with Diez's head is we noticed that there’s something a little off with the shape of his head. It appears to be a little oblong. We’re hoping that we won’t need surgery. We just went through a surgery last year with Dawsyn. So we’re hoping for something minor, such as just wearing a helmet for weeks or months and it’ll correct the issue.

However, we know nothing about this. We’ve never travelled down this path before and so we are just a little afraid of what could possibly become of him and him possibly having to undergo a surgery. It’s a little heart-breaking again, because we just came off a major surgery with Dawsyn last year.

As you can imagine, no parent wants to have any kind of surgery on their children, even something as minor as having their tonsils removed. But when you think of a heart surgery, which is what Dawsyn had, and the possibility of a head surgery, which is what we’re praying that Diaz doesn’t need, it is very, very scary and tormenting to us.

Karen, going with that point because it’s something you’ve posted about online, it becomes so important to practice self-care as a parent, too. How do you do that?

Karen: Self-care is not an easy task for me, because I’m always so busy with the children and running behind them constantly and doing things for them. During this season I decided to start with massages. If I can just schedule one massage and stick to it, every 2 weeks, that’s the beginning of it.

Going to bed early, it’s a small thing. It’s hard for me to lie in the bed and just go to bed because my mind is always running. So one of the things that I am doing is I journal a lot. I journal before I go to bed and that has really been so relaxing for me.

It’s also therapeutic for me to look back a week or so later, and read what I wrote and know that whatever it was that I was stressing about or nervous about, either I’ve already gone through it and past it on the other side, or I can write the events in it. So journaling, going to bed earlier, going to get a massage, and doing all of this.

And with all of the stresses when it comes to Dawsyn’s surgery and things like that, I just really went into prayer mode as well, too. I just asked God to really keep me calm because I had to be strong for him and my other children. I tried to take an extra walk, journal, read, say my prayers, go to bed earlier, have a close friend I can talk to, all of those things helped me and it really helped me during all of the ups and downs of what we had to deal with this season, especially when it comes to the health of Diez.

Watch Doubling Down With The Derricos S2, Wednesdays on TLC (DStv channel 135) at 21:00

TLC (DStv channel 135) is available on DStv Premium, Compact Plus, Compact, Family and Access. To get DStv or to upgrade your package, click here.