Buddy Valastro talks about his Road To Recovery

We’ve seen Buddy battle tall orders before in his business, but in Buddy Valastro: Road To Recovery, the Cake Boss is taking on the biggest challenge of his life 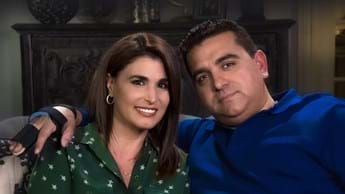 In September 2020, Cake Boss star baker Buddy Valastro was at home preparing to film his new series when the pin setter in his home bowling alley got stuck. He went to tinker with it, and a part of the machinery came down, repeatedly stabbing right through his dominant right hand, between his ring finger and middle finger, before sticking.

With the swift help of cool-headed family members who cut him loose from the machinery and medical professionals, Buddy’s hand was saved. Since then, he has been undergoing a series of operations and bouts of physiotherapy to regain use of his hand. He’s taking us inside his struggle in the 2-hour reality special Buddy Valastro: Road To Recovery, on TLC (DStv 135) this February.

We spoke to Buddy about the accident and how he’s motivating himself to keep fighting through the pain and frustration of recovery.

The day of the accident

What were you getting ready to film when the accident happened?

Buddy: We were working on a little bit of a Christmas special where Cake Boss is today – with my kids growing up and my family. We were all geared up to shoot that. And then the accident happened literally the same day.

Buddy: I was just in shock and something came over me, survival. For some reason, I was calm. I had my sons there. I had my brother-in-law there. I told my sons, “Go get the Sawzall, go get the pliers, get the tools, because I was stuck on the pinsetter. It wasn't like it went through my hand and then it was over, I was attached to it. I couldn't get down. I was bleeding everywhere. I was in pain. My kids cut me out, literally. I was upstairs and in the driveway before the ambulance even got to my house. So they cut me out in two minutes. They were able to unscrew a couple of bolts, get me upstairs. And then, at that moment I got into the car and as I was driving to the hospital, that's when I said, "This is my hand! This is my dominant hand!" And I really started to think like, "Am I going to lose my hand? Am I going to have function?" Really, I had no idea what was going to happen at that time. And the only thing on my mind was making sure that I got my hand to the best hand surgeons in the world. That was really my only thing. And that's kind of why we videoed the footage.”

So at what point did you think, "All right. Let's share with people what's going on with me"?

Buddy: When it happened, I really was worried about my hand. I knew that I would have to go get multiple surgeries or go to the best doctors. So I told my wife in the emergency room, "Take videos of where my hand was, and I want to document exactly what's going on – so that we can send it over to the doctors." We took that footage and sent it to Dr. Carlson in New York. And the next morning she said, "Come in right away." And I went and underwent my second surgery. Less than 24 hours after it happened I was already in New York with another doctor. So, coincidentally, I had the footage. After things subsided, and people really couldn't understand exactly what happened, we said, "We have all this footage…" And so we said why not use the footage? Honestly, it was more for the doctor. It was more for – when you say that you have a spike through your hand, you don't really understand it. When you see the video of what it is, you understand it a lot more.

When you've had surgery on something as delicate as a hand, in the first few days after surgery it can be quite alarming because of the swelling. What was it like for you looking at your hand, wondering if it's going to work?

Buddy: Honestly, it's been really scary. It’s now going on almost 4 months (we spoke with Buddy in late January). I still don't know 100% where my hand is going to be. Yeah. Can I use it? Did I lose it? No. But do I have probably 40%, 50% of the strength that I had? Yeah. Do I have all the dexterity that I had? No. Can I bend my fingers in every direction like I used to? No. But I'm actually going for another surgery in February, and I'm going through intense physical therapy to get strength back 4 or 5 times a week. So there's still a long road. Well, I'm thankful because I still have my hand. I have all my fingers. I have my hand. I don't know if it's going to be 70%, 60%, 80% or 100%. It's going to take at least a year to know what's going on, because my hand is still a little swollen and it's 4 months from the accident. But right after the accident it was swollen – it was pretty crazy. And that's what scared the doctor. Because when I showed the videos of the hand, she thought that the hand was so tight in the swelling that it was going to kill the muscles. That's why I went the next day and I had surgery and I wound up having another surgery after that. And then I have another surgery in February, and then who knows what else we're going to have to do.

What keeps you in the right mindset for recovery (and physiotherapy) every day despite the frustration of there being so much that you can't do?

Buddy: Well, there's a couple of things. I probably was back to work 2 weeks after it happened. I had to get back to work. Even though I couldn't physically do things with my hands, my mind and everything else that I do at the bakery factory wasn’t impacted. I think that if I didn't get back to work, I would've driven myself crazy, because the first 2, 3 weeks, all I did was beat myself up. I said, "But why would you put yourself in that danger?" There's not a harder critic of me than me. So I've been beating myself up left and right on this. And then once I got back to work, it really gave me the motivation to say, "Okay, I'm going to get through this." And starting to train with my left hand, starting to do more physical therapy on my right hand, just seeing where I wind up. So I'm determined to get back to doing what I used to be able to do. And I believe it in my heart and I believe it in my head. It's just going to take some time to do it, so the mindset is to be at the level that I was.

Having to relearn skills and struggling with control, is there something in that that is helping you to connect to the people around you a little differently?

Buddy: Well, I guess it's helped my communication skills, because I've always been the guy to say, "All right, just give it to me, let me do it." Now I have to elaborate more. If I can't do it, somebody else does it for me. So I would definitely say that my communication has gotten a lot better from that sense. Again, I've been blessed where I still have my hand, and I just have to keep working through despite this battle. It's an uphill, it's really a road to recovery, and we're trying to do it as best we can.

What things were you surprised to find difficult to do one-handed?

Buddy: A lot of things. You got to understand, it was my dominant hand. So anything from eating, using a fork and knife, washing myself. Every little thing, doing my hair with my left hand, everything was a lot harder to learn. But I got to say, my left hand has really picked up and I'm doing a lot of stuff that I normally would have with my left hand, so that's a positive.

When you get frustrated, how do you cool off?

Buddy: I just think that it could have been worse. I feel that I was lucky. Essentially, I was crucified – this thing went right through my hand and it was like a big metal spike, and it went basically right through the centre of my palm. So the fact that that happened, and I still have feeling in all my fingers, I can move all my fingers and stuff like that, I feel really blessed.

What was it like having to be in a hospital and get treatment during the pandemic?

Buddy: It didn't really phase me. I think the protocols at the hospitals were really great. We were tested anytime I was in or out. I guess everybody's a little bit more on edge, but I've been safe this whole time. I've been wearing my mask. We went in, we did what we had to do and thank God. Look, I have a new appreciation for doctors and healthcare workers, nurses, physical therapists. Not that I didn't appreciate them before, but when something like this happens to you and you see how much it impacts your life, it just touches you. It hits a little closer to home. And thank God for what they do. Thank God for the capabilities and the new things, because if this was 20 years ago, I don't know if I'd be doing what I'm doing.