Earth Day hope in Perpetual Planet: Heroes of The Oceans

Marine biologist Sylvia Earle talks about life, nature and how hometown heroes are making a difference in documentary Perpetual Planet: Heroes of The Oceans 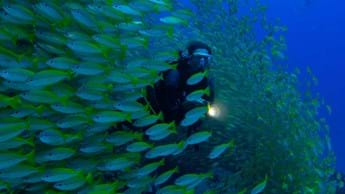 If you’ve watched any nature documentary over the past 20 years, you’ve probably had to weigh up whether seeing the beauty and wonder was worth the agony of hearing and seeing yet again about the scale of ecological destruction that these animals and ecological systems are facing.

We often feel helpless in the face of climate change and plastics pollution. Our little efforts to refuse, reduce, reuse, repurpose and recycle, conserve our water and electricity and reduce our carbon footprint, seem pitiful when the news cycle shows us jungles burning, oceans ravaged, and wilderness being destroyed for the sake of profit at 1 stroke of a political pen. It’s like being a tiny sardine, watching a whale devour your entire family in 1 gulp.

But The National Geographic documentary Perpetual Planet: Heroes of The Oceans is a nature story with a difference. In it, marine biologist Dr. Sylvia Earle introduces us to a handful of people around the world who are, as individuals, leading conservation efforts and working to protect and restore Marine protected areas known as Hope Spots.

“Each of the Heroes is a champion for a Hope Spot around the world. And they have been identified – in part by a Rolex (which sponsors the Perpetual Planet movement) – as champions for what they're doing to make a difference. People ask all the time, ‘The problems are so big, and I'm just 1 person, what can I do?’ And by focusing on a number of individuals, who are doing something, who are making a difference, they can serve as models. If he can do that, if she can do that, what can I do?’” explains Sylvia.

You could be the next Hero.

“Everybody has power. In fact, at this point in history, I like to think that everyone has a superpower of knowing what nobody knew, when I was a child,” says 85-year-old Sylvia. “Nobody (when I was a child) had been high in the sky to see Earth is this little blue miracle in the vastness of the universe. Now, children are growing up with that awareness. And it puts it into perspective, all the things that I learnt over time. From the time they're born, knowing about what life is like on the other side of the world, they are connected. And they can talk to people and see how others live. I think it's the best chance, the best hope that we have right now, for going from planetary decline and turmoil among people – which leads to the terrible things like war, famine, and poverty. Knowing that people all over the world have similar aspirations, that they want to have a good life, they want to have families with a future. When they lose hope, the troubles begin that have led us to where we are right now. But we have the capacity to go from decline to recovery. Ultimately, there is so much effort right now being focused on how we sustain ourselves within the natural systems that keep us alive. It's wonderful to see not just individual conversations, but conversations at the highest levels of government and of companies, asking, ‘How do we have an enduring future?’”

Big moments in Heroes of The Ocean

Heroes of The Ocean is filled with beautiful scenes under the sea. Sylvia singles out 2 in particular. “Every of them (the Heroes) has a great story to tell. But with a manta ray (the subject of marine scientist Kerstin Forsberg’s conservation project in Peru), getting to know how they have personalities. They're individuals, like cats and dogs, and kids, everyone is an individual. Once you know, you can't unknow! And the big whale sharks (Dr. Brad Norman’s project in Australia), knowing that each 1 has its own pattern of spots. With the ability to use a technology, that made it possible to map the stars, they can map the spots on an individual whale shark! I mean, what a gift, what a wonderful thing to do (this is illustrated in the documentary in 1 spectacularly beautiful cut between scenes). Also looking at how these Heroes are engaging, not just their kids, but the children, the future generations and passing it along. We're all the beneficiaries of what has gone before. And to see these heroes purposefully using their superpowers, and investing in the next generation, I find that to be just so inspiring.”

Growing your own nature lover

Sylvia grew up with the ocean in her backyard, but she credits her mom with making her a scientist. “I got knocked over by a wave when I was a little girl. And the ocean got my attention. But what really held my attention, and still does, was the life in the ocean. I think the capacity is there in every child. Most kids are naturally drawn to doing things like not being afraid to pick up a spider or a beetle or an earthworm. A lot of parents say, ‘Oh, don't touch that. Just sit down and be quiet. Just don't bother me,’ or, ‘Don't do that, don't touch that.’ That often turns off that natural curiosity. it was quite the reverse for me. I was fortunate to come up in a family where natural curiosity was cultivated. My mother in particular would bring creatures for my brothers and me to get to know. I remember a frog that she brought in the house to show us how beautiful the golden eyes of the frog were. They were like little jewels. And instead of saying, ‘Okay, now you've seen the frog,’ and throwing it out the window, she showed us where the frog was from, she took it back where she got it. She brought it for us to see, and then took it back to its home. And she let us know, ‘We have a house, that's our home. This pond we had in our backyard, that's the frog’s home’. So it was natural for me to get that sense of connectedness to nature.”

The documentary introduces Hope Spots around the world, where individuals have campaigned and gotten local communities and governments to team up to protect ecologically sensitive areas of the ocean, where, as scientists, they can start work on undoing some of the damage that we’ve done to the planet.

“Hope Spots are examples of where individual champions – like those heroes in film – have taken upon themselves to use their mighty powers, whatever they are. Maybe it's just the power of caring, being able to see the world through the eyes of a child, or the eyes of a creature like a manta ray, or like a whale shark, or like any creature that they empathize with, and to get others to see what they see. And then to extend that into a place, like national parks on the land,” explains Sylvia. “They have (the parks) made so much difference in terms of securing safety, safe havens for birds and, and for all of the wildlife and in the trees and other vegetation. If you get individuals such as those champions who are featured in Heroes of The Ocean, you can get others to realise, ‘I can do something. I can be part of this network of hope’. It starts always with somebody doing something that catches on. And pretty soon you have a better world, because individuals have stepped up and shared their view to make a difference.”

“Getting people to care is the goal,” says Sylvia. “It's a challenge. If people don't know, they can't care. And getting people to really understand that they can and really must make a difference. Knowing what the problems are, to be able to use whatever power they have available to them, whatever talent they have.”

1 of Sylvia’s personal challenges through her organisation Mission Blue, is to target not just individuals, but to target the rich and powerful with a message they need to understand. “Inspiring leaders to take their superpower and direct toward the biggest problem that we face, which is planetary security. Rolex (which sponsors the Perpetual Planet ecological movement) calls it a Perpetual Planet. So how do we maintain the health of the planet? Presidents, the leaders of companies, community leaders, these are individuals who have power. It's (about) inspiring them, to use it in ways that will turn from decline to recovery. There are leaders around the world who are beginning to recognise that, yes, we have to take care of the usual problems that presidents and prime ministers have to face. The headline is always the economy. But we’ve got to take care of the basis of the economy, the basis of our lives. If we fail to take care of the environment, and the ocean dominates the environment, nothing else matters. If you can't breathe, if you don't have a world that is functioning so that the climate is favourable to humans, nothing else is going to matter. Everything else is lost if we lose the capacity to maintain a planet that works in our favour.”

In Heroes of The Ocean, we also see the impact of 1 individual in power: Former President of The Seychelles Danny Faure, who was awarded the 2019 National Geographic Society’s Planetary and Leadership Award for his efforts in working towards stronger protection for the world’s oceans. With Danny’s support, the Seychelles hit its target of designating 30% of its territorial marine areas as Marine Protection Areas in 2020.

So this Earth Day, treat yourself to a message of hope with Perpetual Planet: Heroes of The Oceans

Watch Perpetual Planet: Heroes of The Oceans on Thursday, 22 April on National Geographic (DStv channel 181) at 21:00.

National Geographic (DStv channel 181) is available on DStv Premium, DStv Compact Plus, DStv Compact and DStv Family. To upgrade your package or to get DStv, click here.