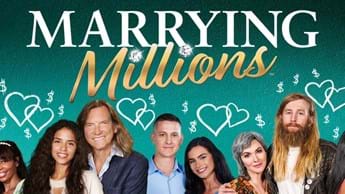 While dating a multi-millionaire involves globe-trotting, paying for unlimited shopping sprees with their black card, and checking into 5-star hotels where you use a bell to order room service – it also comes with issues that money can’t erase such as scrutiny from the rich partner’s family and friends, and those very loved ones constantly questioning your intentions. That’s the conflict that the 7 couples in S2 of Marrying Millions are faced with. There are pairs with huge age gaps and questionable power dynamics, and pairs that are struggling to overcome trust issues like fan-favourite duo: Rich wine entrepreneur Rodney Foster (51) and non-profit organisation owner Desiry Hall (55). They opened up to us about the struggle…

Lifestyles of the rich & faithless

Rodney and Desiry live in different cities and have what appears, on the surface, to be a seamless long-distance relationship. In the 2 years that they’ve been dating, Desiry has been fantasising about their wedding day and future kids, while Rodney was still going on dates around Washington D.C. and chatting to other women. Rodney admits that he’s only been “faithful” to Desiry for 6 months. The drama! “It didn’t mean anything,” says Rodney. “It’s something that just happened. I wanted to [confess] to Desiry but I didn’t have the courage to tell her,” he admits. When that little revelation broke, we saw Desiry throw a fit… and a glass of champagne into his face. Throughout the season, Rodney will be working to mend their broken trust.

Apart from the past infidelity, we see Rodney hiding his relationship with Desiry from his loved ones. She eventually meets his parents while she’s visiting him in Washington. Sadly for Desiry, Rodney’s mom Barbara disapproves of the romance with a capital D. “I wasn’t keeping Des a secret. I just didn’t mention it [to anyone] because she’s in the West Coast [Los Angeles] and I’m in the East,” Rodney tells us. “When I was trying to get her to move in with me permanently, I was met with resistance from her side. Des wanted me to relocate to LA, but moving there would mean that I’d make a bigger sacrifice than if she’d move,” adds the wine brand owner.

Because Rodney was meant with pushback at the beginning his relationship with Desiry, he thought that their connection was disingenuous. “She’d always make demands and I’d meet them and when I’d make a suggestion about anything, she’d dismiss it,” explains Rodney. By the time they appeared in the reality show, the couple have sort-of resolved their living disputes, and Des had temporarily moved in with Rodney, which led to their engagement in episode 11 on Tuesday, 11 May. However, like Barbra, Desiry’s bestie, Sunseray, is turning her nose up at the proposal, which causes plenty of havoc for Rodney and Des already shaky bond going forward.

Dealing with the meddling mother-in-law

As the season progresses, Desiry discovers that their relationship isn’t the only aspect of his life that Rodney is hiding. Barbra reveals that she’s an investor in Rodney’s wine company, which is the reason she demands that Rodney and Desiry sign a prenup. “If you 2 [separate], where would my money go,” asks a concerned Barbara, leaving Desiry speechless.

Desiry returned to LA after filming the season, and when we asked how they resolve disputes these days, the couple agree that communication is key. “Technology helps a lot,” says Rodney. “We talk on Skype or at times, I fly to LA. The majority of the time, Des travels to see me. We make it work. If we have issues, we try to put in the time and effort. That’s all that matters at the end of the day.”

Desiry agrees. “We used to settle disagreements faster before we signed up for the reality show. Now that we are on television, I believe that egos can get in the way. We’re still building the trust in our relationship, which is a huge component of any relationship. If you don’t have trust, you don’t have anything.”

The couple reveals that inviting cameras and viewers into their love life took some adjustment. “I was out of my depth at first as I wasn’t used to the lights, cameras, and the production crew following Desiry and I everywhere,” explains Rodney. “It can get too [invasive] looking at you and stirring at you but I grew comfortable as the days went by.”

For Desiry, joining the reality show was a defining moment as she’d finally got to publicly confront Rodney with questions and the reservations that she has about their relationship. She was certain that he’d let down his guard and come clean with the cameras as her witness. “I’m excited to be part of Marrying Millions. It’s the epiphany of my life. I’m honoured to be part of the cast and question this man on how he really feels about me. I want to see if he is serious about marrying me. So, this has been a great ride,” he says

Whether Rodney and Desiry will walk down the aisle, that’s still a mystery to be solved in the finale of the reality series, coming up in the second week of June.