Happily ever after in The River? Not on Lindiwe’s watch 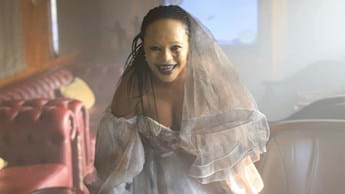 It’s known far and wide that you don’t stab evil mine tycoon Lindiwe Dlamini-Dikana (Sindi Dlathu) in the back and go about your day as usual in SAFTA-winning telenovela The River, weekdays on 1Magic (DStv 103) at 20:00.

Those who have crossed her are either missing a limb, or two – or they’re six feet under, and no one knows where their corpse is buried. It’s that simple: this woman doesn’t play, she slays.

And between Tuesday 29 July and Thursday 1 July, Lindiwe will set her sights on getting rid of her domestic-turned-sister-wife-Nyakallo Kgomo (Jessica Sithole) following Nyakallo’s wedding with Lindiwe’s husband Zweli (Hlomla Dandala) last week Friday.

Watch The River Read about The River Watch 1Magic

1Magic (DStv channel 103) is available exclusively on DStv Premium, and Compact Plus. To upgrade your existing package, click here. Or if you'd like to Get DStv, find a service that suits your needs here.

It appears that Nyakallo missed the memo on Lindiwe’s true colours – which will come bearing deathly consequences. Not only did Nyakallo entice Zweli while Lindiwe was on a business trip in Sao Paulo, Brazil in June this year. But Nyakallo recently tied the knot with Zweli, leaving Lindiwe seething.

The morning after the over-the-top and emotionally charged traditional wedding ceremony, battle lines were drawn. Nyakallo pulled Lindiwe aside for a chat before she left for her honeymoon on The Blue Train with Zweli. Nyakallo held nothing back as she gloated in Lindiwe’s face. “Never in my life have I met such a desperate woman. You’re like bubble-gum that has lost flavour but still wants to be chewed. Your time is over, Lindiwe,” said Nyakallo in a condescending tone.

Lindiwe wasn’t going to allow Nyakallo to get away with disrespecting her, though. The mine owner makes it her mission to ensure that Nyakallo doesn’t return home after the honeymoon. “Lindiwe is about to turn Nyakallo’s life into a misery,” says Jessica, who chimes in on Nyakallo and Zweli’s honeymoon below, which quickly goes pear-shaped as Lindiwe is devising a slow and painful attack against the “other woman”.

The trust is broken

Before we get into how Zweli and Nyakallo arrived at the altar, let’s first discuss how we got to a place where ultimate power couple Lindiwe and Zweli’s marriage crumbled. Because he fell out of love with her, and the only way to save their marriage was to include another woman… 1 who was conveniently right there in their house.

Zweli and Lindiwe once topped the local telenovela power couple list. They’d kiss in public, share inside jokes at the family breakfast table, and refer to each other as “Lala”. However, that came to an end after Zweli discovered the extent of his wife’s crimes. During an investigation into Lindiwe’s daughter, Tumi’s (Larona Moagi) mysterious death in February this year, all the evidence pointed to Lindiwe. Zweli launched an investigation against Lindiwe, and after months of poking, she eventually confessed to killing Tumi. There was no coming back from the betrayal.

Zweli slowly fell out of love with Lindiwe. He merely remained in the marriage for their adult son, Andile (Lunga Mofokeng). The couple attempted to mend the cracks by taking a romantic trip together to Brazil in May, but that didn’t work. With the trust out the window, Zweli invested himself into his bond with the new housekeeper, Nyakallo, in June, and she reciprocated his feelings right away. It took exactly 2 weeks for Zweli to fall head-over-heels with Nyakallo! Which only goes to show that his heart wasn’t anchored by any remaining love for Lindiwe.

“Nyakallo and Zweli’s relationship unfolded effortlessly. They just clicked,” says Jessica, whose character didn’t miss the chance to massage Zweli’s feet after a long day at work or making 1 of her signature protein shakes for him. “Zweli is delicate. He can’t wrap his head around sleeping in the same bed with Lindiwe. Tying the knot with Nyakallo makes more sense to him as she’s just as innocent and kind-hearted,” explains Jessica.

If Nyakallo is so harmless and respectful, how did she manage to steal Zweli? “Well, Nyakallo is brilliant at the game of deception,” says Jessica. “At first glance, Nyakallo comes across as meek. You wouldn’t think that she’s capable of hurting a fly. But she kissed Zweli first in June. Afterwards, she pulled back, apologised for her actions, and she pretended that it was a mistake. I believe that she knew exactly what she was doing. I also think that Nyakallo is a conundrum, which makes her more dangerous than Lindiwe,” explains the actress.

The newlyweds, together with their loved ones take a luxury trip to Mpumalanga in The Blue Train to celebrate their union. As The River creative producer Bonga Percy Vilakazi explains, it’s a lavish affair. “It’s the first time in 75 years that a TV show has filmed in the train. “We’re always trying to keep things exciting for viewers, and that includes finding exciting locations. The Blue Train is one of South Africa’s greatest prides, and the third most luxurious train in the world, so it was no brainer that being in a partnership with them would be a treat for not just us, but our viewers too. It’s opulence at its highest form.”

So, what were some of the pros and cons of filming on The Blue Train? “The advantages were that we got to fully experience the super five-star experience of the Blue Train,” says Percy. “Every ounce of it, from the out-of-this-world food to the unsurpassed service. There’s nothing like it. The scenery, the routes and the comfort. The disadvantage was that because the train is narrow, we had to bring limited equipment to shoot with, but still capture the magic,” adds the creative producer.

While Lindiwe revealed to the family that she’ll be staying behind, it’s one of her wicked tricks to seamlessly assassinate Nyakallo. She sneaks on the train and launches her scheme without the family knowing that she’s behind the ploy. At first, Lindiwe drugs Nyakallo so that the latter doesn’t consummate her marriage with Zweli. Then, the days that follow involve Lindiwe driving Nyakallo over the edge. What follows is a tragic event that will serve as a warning against anyone who intends on stealing Lindiwe’s man.

Nyakallo might very well be digging her own grave by agreeing to marry Zweli. And Lindiwe, dear, why are you packing a wedding dress? Are you going on Honeymoon, too?

1Magic (DStv channel 103) is available exclusively on DStv Premium, and Compact Plus. To upgrade your existing package, click here. Or if you'd like to Get DStv, find a service that suits your needs here.