Why does this happen? It comes down to the steps between taking a live broadcast and getting it to streaming apps. 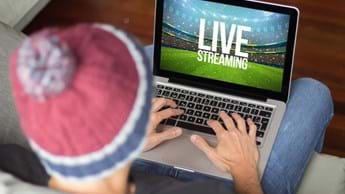 Being able to catch big games while away from home is one of the key benefits of streaming video, but watching a live stream side by side with the same event on normal TV reveals a drawback: streamed video lags behind the live broadcast, sometimes by as much as 30 seconds.

Why does this happen? It’s down to the steps involved in taking a live broadcast and getting it to streaming apps.

The camera receives the image which is typically streamed to an outside broadcast van and then transmitted via satellite or dedicated landline to the broadcast building.

The video stream contains a huge amount of data and needs to be compressed using a codec. This compression process turns gigabytes of video into more manageable megabytes. At the same time, it is also transcoded into multiple file formats - such as high definition for fast internet connections and low definition for slow internet connections. In fact, each stream can have as many as 10 different bitrate profiles.

The compressed video stream now has to be packaged for delivery. This involves adding a file container format and applying digital rights management (DRM) security protocols.

Now the video needs to get from the source to the customer. The further from the media server, the longer it takes to deliver the video stream, which can lead to latency and buffering. To smooth this process and avoid bottlenecks, we use Content Distribution Networks (CDNs). These are third-party companies who specialise in getting the video stream from the source to the end-user. A CDN is a network of servers around the country that share the load and stream the video to the customer from a point as physically close as possible.

The stream being played by the user is actually broken up into short segments that are several seconds long. The device playing the video is constantly reviewing the speed/quality of its internet connection and relaying this back to the source supplying the video. If the connection is good, the next segment sent will have a high video bitrate profile (contains more data, means the picture is better). If the connection starts to degrade then lower bitrate segments are sent. The end result for the user is a seamless playback but sometimes the video is sharp and other times it becomes pixelated.

All of these steps take place in real-time as the game is being played, and this is a challenge for live-streaming companies worldwide because it inevitably results in a streaming lag vs live broadcast. But all is not lost. Improvements are constantly being made to increase the speed of these steps, and over time we expect that lag to become shorter and shorter.

A step-by-step guide on how to download movies, series and sports highlights to your device using DStv Now.

How to connect your DStv Explora to the internet

A whole new world of entertainment is waiting for your when you connect your DStv Explora to the internet.

How to change the language settings on your DStv Explora

Watching DStv with your little ones? You may want to change the language settings from 'original soundtrack' to 'family'. It's as easy as 1, 2, 3.