#ChasingTheSun: Coach yourself to win

Springbok coaches Rassie Erasmus and Jacques Nienaber reveal what their 2019 Rugby World Cup journey can teach all South Africans about the winning spirit. 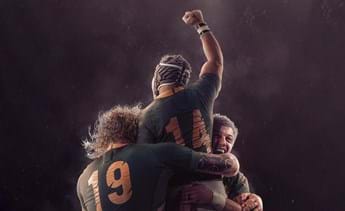 Rugby fans are rejoicing the return of the game after a long winter sports famine. The fever has been spreading, the braais are waiting to be lit, and the vuvuzelas are ready to be brought out again.

Added to this excitement is the edging closer of the premiere of the highly anticipated documentary series, Chasing the Sun.

Even if you can’t tell a rugby ball from a bumblebee, Chasing The Sun is for you. It tells the rousing tale of the Springboks’ path to redemption and World Cup glory in 2019. The powerful five-part SuperSport documentary heads to your screens on Sunday, 4 October, on M-Net (DStv channel 101) and concludes on November 1, on the eve of the one-year anniversary.

Coaches Rassie Erasmus and Jacques Nienaber were an integral part of the Springbok World Cup victory. We caught up with them to learn more about how they inspired the Bok players and ultimately the nation, to believe that we really are stronger together.

“When Jacques and I joined the Springbok coaching team, our main goal was to make the team competitive again,” says ex-Bok Rassie, who was the head coach of the winning team in Japan. “It was vital for the team to be consistently among the top-three rankings in world rugby. We wanted to increase squad depth [with the Rugby World Cup in mind] and wanted to win with a transformed team.”

Securing that as a foundation was the first step, then stacking the blocks was the next.

Jacques, who was part of the coaching staff in Japan and is now the head coach of the South African squad, agrees. “Forming a foundation is crucial, and then you implement a strategy,” he says.

“Our strategy for the tournament started long before we landed in Japan. The management did a lot of groundwork to gather important details on the playing conditions, logistics, travelling and so on. Then, from an on-field perspective, through our consistent emphasis on team alignment, we ensured every squad member was on the same page regarding our preparation and playing philosophy.”

Who can forget the powerful speech that Rassie made during the World Cup about pressure?

Looking back, Rassie says that when they had that discussion, something clicked and the vision and focus that followed, intensified. “I mentioned that rugby should be something that creates hope, but you could only create hope and inspire people if you win, not just by talking or tweeting about it.”

Clinging to that hope and putting it into action made all the difference in the end.

Training your thoughts and adopting a winning mindset is equally vital in reaching a goal like the Springboks did, the coaches agree.

“We made sure that we had the buy-in and co-operation from all the players – not only the World Cup squad, but also the wider group of players,” says Rassie. “We got everyone aligned, and the goal was for everyone to have clarity regarding our objective. We also knew there would be incredible challenges along the way, but we made a commitment that those challenges would not blow us off course.”

Jacques echoes Rassie’s words. “Clarity of the plan, believing in what you do and sticking to that plan – because you will experience turbulence along the way. The most important thing is to hold onto that clarity because then you will reach your goal whether it’s to commit to a relationship, finding a job, losing weight or passing your matric, despite the challenges along the way.”

And that is how you inspire a nation.

Sign up for DStv Now, a free service for all DStv subscribers. With DStv Now, the same channels you watch on your decoder at home are available for you to stream online or by using the DStv Now app on your phone.

DStv has extended its Catch Up service to Access and Easy View customers, and expanded the offering for DStv Compact Plus, Compact and Family