What to Watch on DStv Compact Plus in November 2022 | Highlights

Obsessed November on DStv Compact Plus!

Whatever your passion, you’ll see something to love this November on DStv Compact Plus 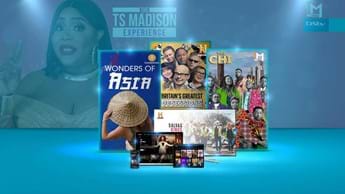 DStv Compact Plus connects you to passion, people and projects this November.

TS Madison’s new reality series is overflowing with humour, heart and huge personalities as she brings us inside her life as a trans woman, surrounded by a loving family and community. There’s also so much love on drama series The Chi. Looking for more laughter and even some strange connections? Comedians and personalities like Liza Tarbuck and Lorainne Kelly connect the dots on five weird topics on the light-hearted docuseries Britain’s Greatest Obsessions.

PS: Because you get to watch so much more on DStv with Compact Plus, check out our other monthly highlights packages for news about November hit series like Imboni Yama Tekisi and Lavish on Mzansi Magic (DStv Channel 161), The Savoy on BBC Lifestyle (DStv Channel 174), and Tyler Perry’s The Oval on BET (DStv Channel 129).

November on DStv Compact Plus

Also on Compact Plus this November

Social media star and funny lady TS Madison (a returning guest judge on RuPaul’s Drag Race) has a new goal: to be the first-ever Black trans woman to host her own mainstream talk show – well, if she can beat Laverne Cox past the post. This funny, authentic reality series takes us inside TS Madison’s home, family and offices, and her friendship with Tiffany “New York” Pollard. Fans in the US have fallen head-over-heels for TS’s loving, supportive mom, Ms Mary, and with the positive representation of trans life that TS and her friends show.

Lena Waithe’s drama series about interconnected lives in a tough Chicago neighbourhood shifts the spotlight to love this season, and not just romance, but all types of bonds. Emmett and Tiff are exploring co-parenting, while new mom Kiesha builds a life for herself and baby Ronnie. Love comes to Kevin when he least expects it, and Jake’s brother, Trig weighs up the needs of his family against those of his community as he considers running for political office.

PS: Look out for the Christmas-centred episode 3.

End your Travel Lover Friday on Curiosity with double-feature episodes on Asia, with host Ashley Colburn. In the Philippines, she walks us through Manila, where she takes a horse and carriage through the Spanish architecture of the city’s old corner, Intramuro. Then it’s time for a walk-through history in Hong Kong, before she heads to Singapore’s Little India and Chinatown, along with Pulau Ubin island. Finally, it’s time for the vastness of China. Ashley boats around the fairy-tale canals of Suzhou, visits some serene, scholarly gardens, learns about tea and joins the traditional Chinese Opera.

Six British stars introduce us to the island nation’s favourite pastimes, meeting experts and chatting with one another about the strange facts they’ve picked up. Comedian and presenter Harry Hill unpacks the uniquely English sense of humour, with help from German comedian Henning Wehn. Chris Packham takes on the national obsession with pets, Lorraine Kelly asks why everyone’s still cosplaying World War II, and Liza Tarbuck applies sunscreen to a pig in pursuit of the truth about British weather. Other topics include the class system, and pubs.

Love home reno shows but want to weep at the waste? The team at Priestly Demolition is on the case on an even larger scale. Head of Salvage Ted Finch, his right-hand man Justin Fortin, and rookie Julien Savage search through old business, bars and factory buildings scheduled for demolition for anything of value (from toys to tools and vintage signs) so that they can save it before company president Ryan Priestly and his demolition crew send that first wrecking ball flying. This season we’ll find out what they saved from the 82-year-old Port Colborne Marine Tower (seen in The Handmaid’s Tale Season 4, episode 3).

Also on Compact Plus this November

Check out the other highlights packages for more on these shows, which you will also be able to watch with DStv Compact Plus this November…