What to watch on DStv Premium in November 2022 | Highlights 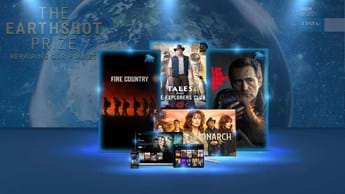 DStv brings you all the fireworks this November! This month’s series bring us all the heroes – from the real-life Captain Planets who’re competing to save the environment, to real astronauts, explorers, mountaineers and adventurers. Meanwhile drama series Fire Country gives us a villain to hero story of prison inmates saving homes and lives.

If the fire’s not hot enough, two more brand new series will be lighting up the night: vampire series Let The Right One, and shamelessly dramatic country music drama Monarch.

PS: Because you get ALL of DStv with DStv Premium, check out our other monthly highlights packages for news about November’s hit shows like The TS Madison Experience on 1Magic (DStv Channel 103), Lavish and Imboni Yama Tekisi on Mzansi Magic (DStv Channel 161), and so much more.

The Earthshot Prize: Repairing Our Planet

DStv has partnered with The Earthshot Global Alliance (first launched by Prince William in 2020) this year to raise awareness about the project. This 5-episode documentary explores different Earthshot projects around the world – all of which aim to achieve five goals crucial to the survival of our planet within the next 10 years: to protect and restore nature, clean our air, revive our oceans, build a waste-free world and fix our climate. In each episode, one project will win this year’s prestigious Earthshot Prize and a cash pay-out to help them to take their work to the next level.

Tales From The Explorer Club

Since 1904, real-life elite adventurers have been sharing their tales with one another at The Explorer Club, which was founded in New York City. Now, the establishment forms a global network, whose adventurers aim to promote scientific exploration and field study. This documentary series opens the club’s doors to us as explorer Josh Gates takes us into the lives of legends like Edmund Hillary, Tenzing Norgay, Ernest Shackleton. Tales From The Explorer Club also explores the modern-day heroes of space exploration, those whose round-the-world expeditions inspire us, and even into the movies and TV, to reveal the real-life daring behind characters like Indiana Jones, and Brad Pitt’s character in Seven Years In Tibet.

Watch Tales From The Explorer Club Season 1 from Wednesday, 9 November at 20:00 on Discovery Channel (DStv Channel 121).

Let The Right One In

They say you’re a day for life, but what about the afterlife? Ten years back, Mark Kane’s (Demián Bichir) 12-year-old daughter Eleanor (Madison Taylor Baez) was turned into a vampire. After years of wandering during which Mark went to extraordinary lengths to bring home the blood (both his own and other people’s), they’re returning to New York City on the trail of a cure for her condition. However, when Eleanor becomes fascinated by Isaiah Cole (Ian Foreman) and the two become best friends, Mark is in for a shock. Ian’s mom Naomi (Anika Noni Rose) is a homicide detective, and Mark has gotten a little sloppy.

Expect dazzling effects in this Jerry Bruckheimer-produced procedural drama series about CalFire – a wilderness firefighting unit made up of prisoners, who are hoping to knock some years off their sentences. Bode Donovan (Max Thieriot) thinks that signing up is his ticket out – until he’s assigned to his hometown, Edgewater, where he’s burned all his bridges. His mom, police chief Sharon (Diane Farr), and dad, fire chief Vince (Billy Burke), have mixed feelings about this bedraggled bird returning to their nest. In the first season, Bode learns that taking on wildfires requires a level of trust, cooperation, and concentration that leaves no room for dodgers.

Yee haw, Nashville fans, if you miss your good old soap-style country music drama, settle in, because Monarch is playing your song. The Romans, founders of record label, Monarch, are considered The First Family of Country Music. Dad Albie (Trace Adkins) and his tough wife Dottie Cantrell Roman (Susan Sarandon) are the crowned king and queen of the scene, but there’s a power struggle between the kids. Dottie favours her older daughter, Nicky (Anna Friel), leaving younger daughter Gigi (Beth Ditto) desperate for the spotlight. Their handsome brother Luke (Joshua Sasse), Monarch’s CEO, could wreck it all when he starts an affair with one of his sister’s beaus.

Also on Premium this November