Get the best of local and international drama, sitcoms, awards specials, reality series, and more on BET. 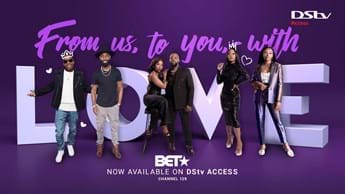 It’s official – from Saturday, 8 October, BET (DStv Channel 129) will be permanently available to DStv Access subscribers. Not only will the channel be accessible to a broader audience, but they can watch the very best of local and international content.

BET was available to DStv Access and DStv Family customers between 26 September - 7 October. During the Open Window, viewers were introduced to BET Original telenovela Redemption, as well as a wide range of movies, series and documentaries.

Now, viewers don’t have to miss out on the action. You can continue watching the complex Zikodes as they try to save their megachurch on Redemption. The family is at war and at odds following the disappearance of Pastor Simon Zikhode (played by Themba Ndaba). Meanwhile, his daughter Faith (Kwanele Mthethwa), is on the cusp of an international music career. She drops everything to rescue her family’s church and legacy. However, she is taken aback when she uncovers devastating secrets about those closest to her. The cast includes beloved South African stars such as Tina Jaxa, Sthandiwe Kgoroge, Yonda Thomas, Pearl Modiadie, Sparkly Xulu, and critically acclaimed SAFTA winner, Seputla Sebogodi.

There’s more to look forward to on BET this October. You get to watch new episodes of DJ Zinhle’s life in her hit reality show DJ Zinhle: The Unexpected Season 2. She juggles motherhood, marriage, and her busy careers. If you’re looking for an intriguing drama show, tune into Tales Season 3, which is an anthology series that is based on popular lyrics of hip-hop songs. You can also watch reruns of international comedy shows such as Everybody Hates Chris, All Of Us, House of Payne and so much more.