A week of sensational singing, pranks and laughter for kids on DStv

It’s the week of April Fool’s Day, and kids’ viewing is loaded with top-tier tricks, sneaky shenanigans and a magical fairy-tale singing competition! 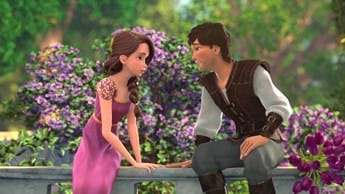 Saturday afternoon and it’s back to the kingdom of the Swan Princess, the magical series of animated films that charmed the little ones in 1994. In Swan Princess: Kingdom of Music, brand-new to M-Net (Channel 101), Princess Odette and Derek are hosting an international singing contest in honour of their daughter Alise’s birthday. And this time, it's Alise’s turn to find her true love and help break an evil sorcerer’s spell.

On Monday, kids can catch the Spyder siblings as they return to Nickelodeon (DStv channel 305) for the second season of secret agent shenanigans in the name of Mother Nature. Produced in Israel, this non-violent yet action-packed series is filled with fun and entertainment for the whole family as Tommy, Nikki and Daniel once again go undercover in the name of the Environmental Counter Crime Organization (ECCO).

No one will be pulling a fast one on Nicktoons (DStv channel 308) kids as the channel celebrates a week of pranks and tricks leading up to April Fool’s Day on Thursday! Join favourites like The Wild Thornberrys, Spongebob, Fairly Odd Parents and many more for the ultimate in prank-tastic episodes, weekdays at 18:00.

The Swan Princess: Kingdom Of Music

Get ready for an afternoon of singing, laughter and love. Talented singers from all over the world gather in Princess Odette’s kingdom to compete for the honour of performing at her daughter Princess Alise’s grand birthday ball. When Alise meets the enigmatic Prince Li of Cathay, she is instantly drawn to him, and has to face her feelings for her childhood friend, Lucas. Everyone is surprised when Li’s sister, Princess Mei Li, secrets herself onto her brother’s ship to ask Odette and Derek’s help in defeating a curse that has been cast on her beloved Chen.

Back for a brand-new season, siblings Tommy, Nikki and Daniel are pulling out all the stops in the name of the Environmental Counter Crime Organization (ECCO). What they lack in training and experience, they make up for with enthusiasm, computer smarts and teenage ingenuity to stop those who plot against the environment in their tracks. In the season’s first episode titled “Flat Tire”, the Spyders recruit a new member in return for a chance at the all-important meeting with Goodman.

The Moto Pups are taking over lunchtime weekend viewing with a special two-part episode of pedal-to-the-metal pup racing action. On Saturday in Pups Save the Donuts, Ryder and the gang have to find Mr Porter’s mini-donut machine after the Ruff-Ruff Pack make off with it. On Sunday, Ryder joins forces with Wild Cat and his super-speed boosters to come to the Kitten Crew’s rescue when the Ruff-Ruff Pack are up to their old tricks again.

If you need inspiration for pulling the perfect prank for April Fool’s Day, Nicktoons has you covered this week with all the naughty inspiration and laughter you can handle. Every day, catch special April Fool’s Day-themed episodes from The Wild Thornberrys trying to outdo each other with the best pranks to hypnotic high jinks in Back at the Barnyard. There are also special episodes from favourites like the crazy Rabbids, Alvin and the Chipmunks, Toon Marty and The Penguins of Madagascar.

Jim Jam (DStv channel 310) continues its line-up of fun yet enriching programmes for younger kids, ensuring that they learn something new and fun every day. On weekdays at 8:04, there are specially selected back-to-back episodes of Berry and Dolly, Guess with Jess and Fireman Sam promise to make learning fun for everyone.

Download the DStv Now app (Apple or Android) or go to now.dstv.com on your laptop. Your little ones can watch their favourite shows on DStv. Just remember to connect to the WiFi first so there are no surprise data costs.