Put your feet up with DStv this long weekend as we entertain you with the best in hit comedy, drama and soap operas. 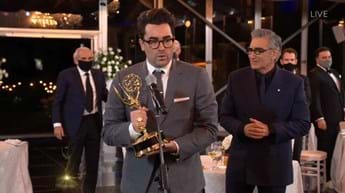 Save the date, people! The offbeat comedy, Schitt’s Creek, is rewinding and starting right at the beginning on Comedy Central (DStv channel 122) this week. Boasting a massive fan base and award-winning cast (Catherine O'Hara and Dan Levy just walked away with Critic’s Choice Awards for their performances), it’s likely you know someone who cannot get enough of the show. So why not find out what the fuss is about when it premieres on Monday?

Across the world, but in the same vein in terms of flamboyance and high theatrics are the comforting telenovelas Star Life brings to soap opera fans daily. See below for the latest updates from Strange Love, Sacred Relationships and My Identity.

The Victim, praised as a “gripping, vicious thriller,” by The Guardian, is premiering on Showmax on Thursday, 1 April. The four-part Scottish series has a strong cast with Kelly Macdonald (Boardwalk Empire), James Harkness (The English Game) and John Hannah (Sliding Doors) in leading roles. Follow the case about a child killer, recently released from prison, facing the wrath of a grieving mother. But is he really the killer or is it a case of mistaken identity?

Tune in to DStv and Showmax this week for a bouquet of international shows to keep you entertained over the long weekend.

The Canadian sitcom, which set the record for the most Emmys won by a comedy series in a single season, premieres this week. Watch season one, episode one where an uber-wealthy family suddenly loses it all and must move to the only remaining asset they have – an ugly small town named, yes, Schitt’s Creek.

Different lives intersect in the drama about a fertility doctor who used his sperm to conceive 100 children during his career. Now the children are connecting the dots. Look out for actor Nick Cameron in the last four episodes. He stars as the gymnastics coach who has a complicated history with Roxy Doyle. You’ll know him from Chicago Fire and Chicago Med.

The British soap opera continues this week when Whitney drops a bombshell, Chelsea carries out a desperate act to save herself and Mick is ready to open up. Did you know, EastEnders actors Jamie Borthwick and newcomer Charlie Winter discovered they are second cousins? The soap stars recently did some investigating and uncovered their family connection.

Law of the Heart

Professional and personal lives clash in the glamorous drama following the most prestigious family lawyers in town. Watch them fight for justice and love. This week, Catalina files a complaint against Leonardo for theft. Meanwhile, Camilo spies on Pablo and Julia when they leave the police station.

She’s a criminal mastermind on the run, he’s a ruthless cop on her tail. But they are brother and sister. In the previous episode, La Nana is punished for violating regulations when she is found with a cellphone. This week, Morillo loses his composure in front of Manuel.

When your lover's wife has a cruel streak, you'd better watch your back. In new episodes of the Spanish-language soap opera this week, the mafia man pressures Teresa Cristina (said wife) to give him money in exchange for not revealing the incriminating secrets he heard.

Love, money and a misunderstood past send a newlywed couple on a rollercoaster ride. Can Astha ever love the arrogant man who conned her into marriage? This week, Astha is thrilled with her new job. She decides not to handle the silver jubilee function of the Agnihotri Institutions, but in vain.

Arranged marriages gone wrong and the quest for true love are the focus of the new Indian drama series, which premiered on Star Life recently. This week, artsy Abir is shocked to learn that Kunal has absconded from his wedding. He confronts Parul about it while Mishti lingers near the Raajvansh mansion.

The Indian soap opera follows Avni, who works hard to shake the stigma of being an illegitimate child born out of wedlock to a famous Indian father and a Muslim mother. Avni falls for Neil, but they have their own obstacles. In new episodes this week, Neil and Avni visit her stepmother’s house. Neela asks Madhavi, the maid, not to reveal that Neil knows the truth.

In the first season of the futuristic drama, Jax joined Earth's Space Training Academy. Now in season two, far more the wiser, she joins the Earth Confederacy Intelligence Service and space is her oyster. But Jax is looking for a needle in a haystack – her long-lost mother who is still alive.

Season two of the Scandinavian sci-fi premieres on Showmax this April. Thea sees her future in her dreams and is able to stop bad things from happening in the present. This season, her teenage gang faces new threats and must stop a murder all while learning uncomfortable truths about themselves.

You’ll recognise John Hannah as the love interest from Sliding Doors with Gwyneth Paltrow. He’s the detective in the Scottish crime drama premiering on Showmax this week. When a bus driver is brutally attacked, a mother is brought in for questioning. Did she target the victim thinking he was her son’s killer or is it a case of mistaken identity?

Sign up for DStv Now – it’s an online streaming service for all DStv subscribers. Watch the channels you watch on your decoder at home, but on the Internet! Go to now.dstv.com on your laptop and Catch Up on the episodes you missed.