Dive into the long weekend with a fun teen Aussie swim flick, all the meatballs you can order and your Paw Patrol pals. 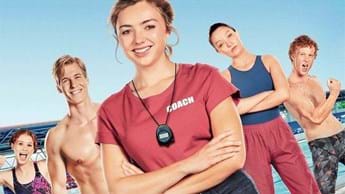 Saturday afternoon’s movie on M-Net (DStv channel 101) is not your average fish-out-of-water teenage flick. Described by Aussie website FilmInk as “a blissful charmer”, Swimming for Gold is set in stunning south-east Queensland and takes a fun yet engaging look at what it takes to overcome one’s past to forge your future. Set in the world of competitive swimming, fans can look out for fun cameos of their favourite champions from around the globe.

Younger kids can look forward to a brand-new episode of Lamput on Boomerang (DStv channel 302) on Saturday morning when our orange morphing friend swaps brains with The Boss – with hysterical results. In the afternoon, Nick Jr (DStv channel 307) features a high-octane Revved Up special event with back-to-back episodes of the best paws in the business, Paw Patrol.

And last but definitely not least, on Monday’s public holiday, the whole family can sit down to double helpings of Cloudy with Meatballs on Cartoon Network (DStv channel 301). Based on the classic 1978 children’s book by Judi Barrett about a magical town where food rains down like manna from the sky, both the original film as well as its sequel have become classics in their own right.

The whole family will want to sit down to this fun yet inspirational film about discovering your true self in the place where you’d least expect it. US champion swimmer Claire Carpenter (Peyton List from Disney’s Jessie and Bunk’d) is shipped down to Australia after a traumatic poolside mishap pauses her competitive career. Tasked with training the boys swimming team at a Brisbane swim camp, Claire finds herself facing off against an old nemesis. But with a little help from a new friend, she discovers that achieving your dream doesn’t have to mean sacrificing your true self.

This week, our zany orange shapeshifter is caught up in an unexpected brain-swapping showdown. After brilliantly developing a brain-swapping ray, Boss does a not-so-genius thing by using it on himself. The result? The Boss starts acting strangely…Lamputty. And Lamput finds himself in the Boss’s shoes – literally!

Get ready for an afternoon of paw-tastic fun with the Paw Patrol gang on Nick Jr (DStv channel 307). From 13:00, back-to-back episodes will thrill the little ones ending with the clash of Moto Pups: Pups vs The Ruff Ruff Pack at 15:20. With the famed Motorcycle Stunt Show rolling into town, it also means that stunt cyclist Wildcat is back. But when the Ruff Ruff Pack threaten the town’s safety, Wildcat puts her competitive nature aside and joins the Paw Patrol to help protect their town.

With International Water Day falling on Monday, Nicktoons has selected special episodes of all the best shows to bring the fun, as well as awareness, to water and earth conservation. Kids can catch these shows weekly at 18:05, which will feature episodes from favourites like Winx Club on Monday, Peppa Pig, Corn & Peg and Spongebob Squarepants on Tuesday. Wednesday is Regal Academy’s turn, as well as Chop Chop Ninja, with The Fairly Odd Parents on Thursday.

Tom and Jerry: The Fast and The Furry

The OG cat-and-mouse duo are back in Tom & Jerry: The Fast And The Furry. A zany cartoon spoof of competitive reality TV, the boys are off on a race around the world in true Amazing Race style to compete for the prize of a brand-new house. Their opponents? Our heroes face off against a grandma and her dog, a soccer mom and even a legendary TV action hero. It’s going to take everything they’ve got if they want to win the coveted mansion.

Cloudy with a Chance of Meatballs

Flint Lockwood (voiced by Bill Hader) is an ambitious but not very successful inventor, and when his latest crazy invention actually works, Flint is convinced his days of failure are behind him. Also hoping to impress the local weather girl (voiced by Anna Faris), he unleashes his machine that makes a smorgasbord of food rain down on his famished town. But when his invention goes into overdrive, Flint realises his ambitions might have gone a tad too far.

Cloudy With A Chance Of Meatballs 2

Flint, the inventor from the first film, is at it again, this time as a valued employee of Live Corp. His crazy foodie invention's still on the loose and it seems like it's getting smarter. He'll have to find it and destroy it once and for all.

Does your kid like to watch movies on your phone?

Download the DStv Now app (Apple or Android) or go to now.dstv.com on your laptop. Your little ones can watch their favourite shows on DStv. Just remember to connect to the Wi-Fi first so there are no surprise data costs.