Doctor Khumalo to tell his story

The four-part documentary delves into the soccer legend’s life on and off the pitch. 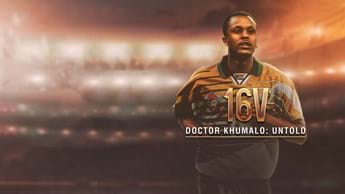 Affectionately known as 16V, soccer legend Doctor Khumalo brought joy to millions with his on-field career, and his life off the pitch is just as riveting. Now, his story and career will be shared in 16V Doctor Khumalo: Untold – an intimate 4-part weekly docuseries, which premieres on Mzansi Magic (DStv Channel 161) on Sunday, 2 October at 20:00.

From historical moments such as the 1996 African Cup of Nations, to his stint playing in the US and his iconic career with Kaizer Chiefs, to his soccer-filled upbringing and youth under the apartheid regime, the docuseries will show a side to 16V like you have never seen him before.

In the docuseries, Khumalo tells his own story, alongside former teammates, ex-footballers, politicians, celebrities and media personalities, who share commentary and personal anecdotes.

Untold shows us the man behind the name, behind the fame and behind the legend, painting an intimate portrait of Doctor, a man who had to show up and show out, even when navigating the painful loss of his closest loved ones. The touching and exciting story of nostalgia, victory and loss will bring you joy as easily as it will bring tears to your eyes.

Produced by 54 Connect, the docuseries celebrates Doctor in all facets. With his magnetic personality, infectious smile and skills, he made the most of his life as a soccer megastar.

“We’re excited to be premiering this exclusive docuseries on Mzansi Magic. Doctor Khumalo’s fame and impact transcended football – he was and still is an icon. 16V Doctor Khumalo: Untold is a celebratory, raw and honest portrait of one of our living legends,” says Shirley Adonisi, Director of Local Entertainment Channels at M-Net. “As a channel, we are proud to have the opportunity to honour our national icons while they are still alive. This is a series you won’t want to miss,” she adds.