All the winners at the 2021 kykNET Fiëstas

The kykNET Fiëstas, which was recorded beforehand for the first time, honours outstanding performances in the performing arts since 2011. Here are all the winners from the 11th annual event. 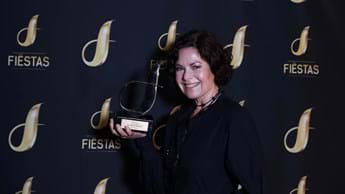 “When COVID-19 hit South Africa last year, the world didn’t stop revolving and artists didn’t stop being artists. Festivals were cancelled, theatres were left in the dark and the world shrunk – closed until further notice. Artists had to experiment and find new platforms to survive. The Afrikaans festivals took the lead and brought about a revolution through various innovative projects.

“The result was such a great number of new online and virtual performances that we introduced new categories this year to acknowledge all the outstanding work. Thank you to each artist who continued to work to bring light in a very dark time during the pandemic,” said Karen Meiring, M-Net Director: kykNET Channels, at the 11th kykNET Fiëstas, which was broadcast on Sunday, 7 March, at 20:00 on kykNET (DStv channel).

There were various highlights during the awards ceremony, with winners delivering emotional acceptance speeches and legends being honoured with beautiful words by friends and colleagues. Three young artists were also surprised with a Sinjatuur award. These awards go to artists who have achieved great things so far in their careers.

Anna-Mart van der Merwe, who also received the award for Best Actress, surprised Cintaine Schutte with a Sinjatuur award with the following words: “Your presence in our industry is incredibly valuable. This award serves as recognition and motivation for you – for you to know that we see you, that the industry appreciates you and to tell you that you are on the right path.”

Karen Zoid accepted her award for Best Music-driven Production: Open-air and Podium with the following words: “I want to dedicate this award to all the musicians who are struggling at the moment. We aren’t beggars; we don’t play for tips. The creative industry has been left broken, but we are creative people and I want to say to everyone, let’s figure this out together. We can, and we must stand together.”

kykNET is a proud supporter of the Tribuo fund which was founded to support freelance artists during the pandemic. The fund has helped more than 300 artists so far. All the 11th kykNET Fiëstas nominees received two Checkers vouchers – they could give one of these vouchers to another artist or a deserving organisation.

Karen Meiring’s final words at the awards ceremony were moving: “To each artist: may you, as many times in the past after a crisis, take lead, and comfort and energise audiences. We acknowledge and appreciate you and look forward to seeing you on the stage once again.”

Here are the winners of the 11th kykNET Fiëstas:

The Tribuo fund was found in collaboration with Karen Meiring (kykNET), Cornelia Faasen (NATi) and the Feesteforum (Aardklop, KKNK, Innibos, Suidoosterfees, Vrystaatfees and the Toyota US Woordfees) to support freelance artists. The fund is dependent on contributions by supporters who would like to help the arts during this difficult time. Contributions can be made by a private person, corporate institutions or philanthropic donors. 18A tax certificates will be issued on request. Contributions can be made anonymously or contributors can be acknowledged as a donor to the fund.

Get the DStv app, a free service for DStv subscribers. With the DStv app, the same channels you watch on your decoder at home are available for you to stream online at https://now.dstv.com/ or by using the DStv app on your phone.