A revealing interview with The Duke and Duchess of Sussex, a whole new channel of sizzling entertainment, chasing a cash prize or besting a brother – that’s just some of what’s in store this week on DStv reality. 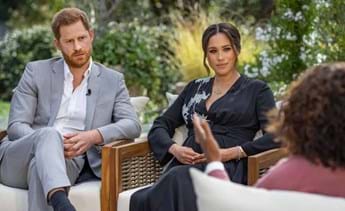 Fresh from the US, M-Net (DStv channel 101) will air CBS Presents Oprah with Meghan and Harry this week. In the two-hour special, The Duke and Duchess of Sussex sit down for an intimate conversation that covers a variety of topics from their family-focused decisions and forging a new future together.

Get ready to fangirl over music’s biggest boy band. Brand-new pop-up channel tVN (DStv channel 134) brings your favourite K-pop sensations direct to your living room. In the multi-dimensional reality show, NCT World 2.0, the 23 members of NCT give us a peek at their life inside a television show. For more K-fun, check out what else is in store this month here

Undercover Billionaire: Comeback City is the true story of how a down-on-his-luck businessman bet the bank on the American Dream starting on Discovery (DStv channel 121). Glenn Stearns walked away from his life, money and friends to work undercover in a tiny town in rural Texas with only $100. His goal? To build a million-dollar company, fast. It took 90 days to recoup his initial investment.

Looking for wrong answers only! An addictive and hilarious quiz show, QI S19 on BBC Brit (DStv channel 121), is hosted by Sandi Toksvig (of Great British Bake-Off). It features a revolving panel of guests who all aim to answer questions that have been rejected by all the other shows.

Racing around the world for $1 million. Sounds like a dream? Or a nightmare? That is why teams of friends or family members must rely on their resourcefulness, camaraderie and luck, to win the newest season of The Amazing Race on M-Net (DStv channel 101) and the grand prize.

Bidding on a foreclosed house in a hot market makes for big drama in this new HGTV (DStv channel 177) series, Brother vs Brother. In each episode, Property Brothers, Jonathan and Drew Scott, fight it out to see who can flip a home for the highest selling price. Armed with dream teams of renovators and designers, they battle from demolition to sale.

Oprah Winfrey will speak to Meghan, the Duchess of Sussex, in a wide-ranging interview covering everything from stepping into life as a Royal, marriage, motherhood, philanthropic work to how she is handling life under intense public pressure. Later, the two are joined by Prince Harry as they speak about their move to the United States and their future hopes and dreams for their expanding family.

A multiverse reality show that stars all 23 NCT members. Thrown together to take on different tests to reveal their true colours, will the members succeed? And what new worlds will each one unlock along the way?

It’s the ultimate rags to riches story. Over 40 years, Glenn Stearns went from a private school upbringing in Long Island, New York, to becoming a self-made multimillionaire businessman – but he’s never forgotten how far he had to fall to get back up into the realms of the upper class. These days, his focus is on helping others who want to do the same. If you want to be successful, you need people around you who will support and help you.

If Sandi Toksvig were to ask you the following question, what would you say? "How do you measure the height of a tree?" And how would you explain your answer? The show sets its contestants the challenge of inventing surprising and ingenious answers to questions that just sound too wild to be true!

Contestants on The Amazing Race want to win the ultimate prize: $1 million. In some ways, it has also made a difference to how people view the show and television itself. Some viewers have said they believe that TV props are becoming “fake” since many TV shows now use obvious set-ups to create drama. On the other hand, the show has changed the way people look at travel since it is not only about exhilarating adventure and competition, but also a tale of discovery.

For brothers Jonathan and Drew Scott, the Property Brothers franchise is a family affair. But things get heated when they're paired against each other in a series of challenges designed to deliver maximum sibling rivalry. It's not enough to compete on who can sell their home the quickest or for the most profit. They also have to contend with finding an ideal flip for fellow property expert, real estate mogul, international investor and mentor, Barbara Corcoran.

While still trying to finish current projects, each brother seeks the advice of his own dream team – from specialists on design and renovation for interior and exterior preparations to vendors and suppliers. Plus, they'll be pitching their ideas on how to polish off their properties by appealing to homeowners with an attention-grabbing proposal.

Get the DStv app (Apple or Android) and download all the new episodes of your favourite shows to watch on your phone or tablet – anytime, anywhere!