Who’s who on tVN 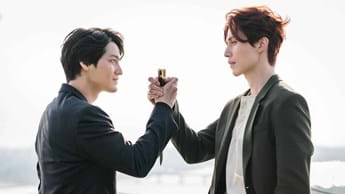 tvN (DStv channel 134) is South Korea’s most popular entertainment channel and features massive stars in dream pairings in a variety of series. But if you aren’t familiar with the K-Drama and K-Pop landscape, you might be asking the equivalent of “Who’s this Connie Ferguson person?” or “Who is Trevor Noah? What, he’s funny?” So here’s our quick guide to just some of the famous faces you can see…

South Korean superstars Song Hye-kyo (Descendants of The Sun, 2016) and Park Bo-gum (Love In The Moonlight, 2016) are the leads of the new 16-episode romantic drama series. She’s the CEO of a large hotel, he’s a new employee, but whoops, they remember each other from a brief, whirlwind romance they shared in Cuba.

In real life, Park Bo-gum was a guest at Son Hye-kyo’s 2017 wedding ceremony – as a friend of her then-husband, her Descendants of The Sun co-star, Song Joong-ki – and he played the piano for the couple at their reception.

Cheese In The Trap

Watch Cheese In The Trap

Eric Moon plays the hero of the romantic comedy series, Another Miss Oh. A sound director named Park Do-kyung, who was jilted at the altar, accidentally takes revenge on a woman with the same name as his ex-fiancée. Whoops!

Tale of The Nine-Tailed

Homicide detective Cha Ji Won (Moon Chae Won) has no idea how much her husband, Baek Hee Sung (Lee Joon Gi), is keeping from her about his past until she starts investigating a series of unexplained murders. If you’re a K-series stan, it’s one to watch since this is a reunion for Lee Joon Gi and Moon Chae Won, who performed together before in the South Korean adaptation of Criminal Minds. Lee Joon Gi had the Derek Morgan-type (Shemar Moore) role, while Moon Chae Won was the Emily Prentiss-style (Paget Brewster) character.

tvN will be on air until Saturday, 12 June 2021, and all series that launch on the channel will play out in their entirety during the channel run.