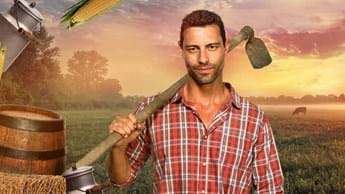 “We saddled a wild horse,” says Nina Swart, director of reality series Plaasjapie, which kicks off and starts bucking on Thursday, 14 July.

In this reality series, 18 city slickers are giving up their comfortable city life to muck in on Ewan Strydom’s dusty Swartland farm and do all that dirty work, in two teams, for 21 days. “They have to do everything that farmers usually do: take care of pigs and sheep, grow maize and milk cows,” explains presenter (and former and current plaasjapie), Ewan Strydom, co-presenter of kykNET's lifestyle show Bravo!

“It's a social experiment and it was interesting to see how human nature comes out in this setting,” says series creator Albert Snyman. This is Albert’s first reality series with his writing partner Louis Pretorius, who usually writes drama series such as Die Boekklub and Troukoors (both now on Showmax). “We did a lot of research and are extremely satisfied with the end result. There’s definitely something here,” adds Albert.

In addition to taking care of their farm, the two teams compete in challenges in each episode – from an obstacle course in which they climb hay bales, to more intellectual games that give the players all a chance to win. Someone from the losing team is voted out in each episode, until one new farmer picks up the R1 million prize money.

“It sounds like Survivor, but it’s not,” explains Nina. “The participants live in very basic conditions in a barn but get three meals a day. The great thing is they must look after the farm, and if you want to vote someone out you must be strategic: you can’t vote for the guy who may be doing a good job tending to the sheep because when he is gone, who is going to maintain the sheep’s good condition? And, the pigs and sheep also chose their favorites,” she adds with a laugh.

There’s another twist. “With every challenge, you can win a luxury, like camp beds for everyone,” says Albert. “But when the person who won it is voted out, they lose it. So, you must think carefully about what you do.”

Uh, Ewan, buddy, can we add more players, though? The cows seem moo-ody

getting your hands dirty

“We filmed in the Swartland region of the Western Cape in difficult conditions,” says Albert. “Luxuries later did not matter anymore, sometimes it got so hot the cameras overheated. Just think how the participants felt who had to work in that sun on a 5-acre farm!

“The participants had to wash dishes from the beginning and do a lot of manual work, because the whole series revolves around basic farming – no equipment or modern facilities. The participants came up with a Survivor idea and thought they should form alliances, but that changed quickly. Everyone had to work together to achieve their ultimate goal – to run a farm successfully. Camp beds and other luxuries were no longer important, because everyone soon became one with their environment.”

You’ll need to tune into the first episode on Thursday, 14 July to meet the participants. “There is a nice mix of jocks to metro men,” says Nina. “And it’s great to see them all grow through the series. It was actually sad when the losing team went to visit the co-operative where Ewan meets them and then someone had to go home.”

Albert hints that the winner is going to be a big surprise. “But it’s a worthy winner! And I can tell you, when you are stripped of everything, people will surprise you. In fact, we all have more good in us than bad.”

Plaasjapie is unique to South Africa and is not based on any franchise or existing format of a series, unlike Boer Soek ŉ Vrou which is also broadcast in other countries. “It was special to do something so genuine to our country. People do not realize what it takes to farm, but it is such an important part of who we are,” says Ewan, who treated the participants with compassion. “Participants sat around the campfire in the evening. Then it’s quiet. Only you and the people around you who are getting less and less as the series progresses. I was actually jealous of them, because you really become one with everything around you.”

Fortunately, you don’t have to get up with the chickens to enjoy Plaasjapie…