Cartoon Network’s (DStv 301) new kids’ show, The Fungies, will grow on you

Explore a whole new world with The Fungies

The Fungies are kind, clever and curious – and funny enough to get the whole family watching together. 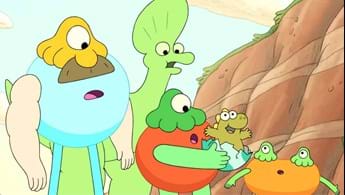 There’s something nostalgic about kids' shows that play up absurdity and are filled with bright colours that make it impossible for you to forget the characters.

In recent times, Cartoon Network (DStv 301) hit viewing gold with kids' shows like Adventure Time, The Amazing World of Gumball, and Steven Universe. These are incredible story-building worlds filled with interesting characters who develop over the years to become the heroes of many kids and grown-ups. On top of that, these stories carry messages about friendship, kindness and self-acceptance in between the ridiculous dialogue and silly scenarios.

Now there’s a new future favourite on the way in The Fungies on Cartoon Network. Its theme song includes the line, “If you’re inquisitive, inclusive, respectful and kind, you can be a Fungie too”.

The small city of Fungietown is inhabited by blobby, fungus-like beings who live in toadstool-shaped houses. They can do all sorts of strange things with their bodies like splitting in two, sneezing their own heads off, stashing cool things inside their bodies for safekeeping, or tugging off an arm and replacing it with a snake if the occasion calls for it.

Our hero is Seth, a smart fungi-boy whose bedroom is labelled “Science Zone”. He loves going on adventures of all types, be it a dangerous quest to a volcano or a trip down the street to bother the neighbours. Joining him and his little friends is Seth’s artistic older brother, Pascal (voiced by series creator Stephen Neary), who acts as the voice of reason on their adventures, which often end up with them causing all sorts of trouble for the Fungietown folk.

But the neighbours and parents are forgiving because Seth and his friends’ rallying cry is to “go do science”. On their adventures, they look at the world and think deeply about what they see, coming up with all sorts of questions, which they then try to answer. And if they run into problems, well… those are really another sort of question, aren’t they?

The Fungies’ strange bodies allow them to do neat things like popping off their eye and putting them into small places so they can see what animals are getting up to, which is really a zoologist’s dream. And these animals include dinosaurs because The Fungies is set in prehistoric times.

“I really wanted to make something new that kids have never seen before, that they could feel that it’s theirs entirely and discovering for the first time, just like how Seth is discovering a world around him,” says Stephen.

A spore of an idea

Creating an entire, living, breathing world from scratch is no mean feat. Creator Stephen Neary first got the idea for The Fungies during an Internet binge. “I was up late on Wikipedia, and I learnt about these ancient fungi called Prototaxites. They grew on Earth about 400 million years ago,” explains Stephen. “So in tone, the show is sort of like, ‘What if the entire Earth was a kid becoming aware of themselves for the first time?’ And I wanted these new and developing personality traits to be embodied by different characters in the show.”

Underneath the wackiness, bright colours and simplistic drawing style is a show that blends humour and understanding. And this is bound to get adults watching with their kids.

Stephen had always intended for the show to trigger something in adults that brought them back to their critter cartoon-loving days. He recalls, “I started thinking about the sort of cartoons I enjoyed as a kid. There were so many creature shows – Fraggle Rock, Popples, Smurfs, Noozles. But it seemed like all of these shows had certain undercurrents of creativity too, like they were unapologetically themselves. That was the sort of show I wanted to make with The Fungies.

“As I was working with Cartoon Network, I was always paying attention to what was happening in shows like Adventure Time and Clarence, and seeing how playful and light-hearted most of the stuff is. So I decided to play more into that rather than make a sciencey show. But the exploration aspect is still there,” adds Stephen.

“I think the world is pretty scary right now, and there’s a lot going on, and I hope it just gives parents and their kids 11 minutes to kind of check in with themselves, tell a little story and walk away feeling maybe a little bit more sincere or hopeful or wholesome than when they started the cartoon. That’s my hope. And also maybe to laugh once or twice,” he says.