Henry Danger and the musical episode

Henry Danger faces the music in a special episode

We’re jazzing it up with Henry Danger this season – and you don’t want to miss it! Watch it on DStv. 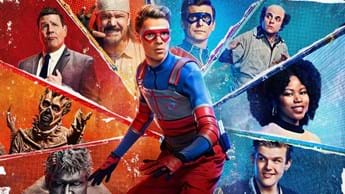 Henry Danger faces the music in a special episode

In episodes 21 and 22, there’s a musical curse over Swellview and only Kid Danger and Captain Man can stop the beat.

In a world in constant need of superheroes, one teenager takes it upon himself to rise to the challenge. His name is Henry Hart and his part-time job – earning him $9 an hour – is not your idea of ordinary.

The small town of Swellview can rest easy knowing Henry is the sidekick to Captain Man, the well-known superhero. Unfortunately for Henry, he’s sworn to secrecy by Captain Man not to divulge his extracurricular activities to his school buddies or his nosey sister, Piper. Imagine how popular this eighth grader would be if he could! But every hero needs a name, so among his superhero brethren, he goes by the name of Kid Danger.

Now in its fifth season, Henry Danger is Nickelodeon’s longest-running live-action series and has been nominated for two Favourite TV Show, one Funny TV Show and two (one which the series won) awards in the category of Favourite TV Show at the Kids’ Choice Awards.

Kid Danger and the musical curse

Episodes 21 and 22 of this season will be Henry’s toughest test as he tries to overcome a musical curse that has Swellview in a difficult spot. His hero, Captain Man, cracks under the pressure and it’s up to Kid Danger to put a stop to it!

Also available on Catch Up and to watch online at now.dstv.com with DStv Now.

Download the DStv Now app (Apple or Android) or go to now.dstv.com on your laptop. Your little ones can watch their favourite shows on DStv – just remember to connect to the Wi-Fi first so there are no surprise data costs.