Films and series for your kids to stream on Showmax 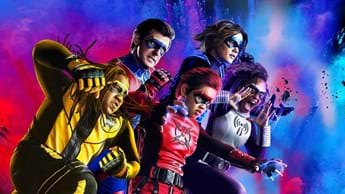 So your youngest has already binged S1-6 of Paw Patrol and Peppa Pig, S1-5 of Blaze and the Monster Machines, and all the Sesame Street content on Showmax. And your eldest has already watched eight Harry Potter movies, as well as the Hobbit and Lord of the Rings trilogies. And, depending on where you are in the country, their school holidays haven't even started yet...

Thankfully, Showmax has put together a timely guide to the 10 best films and series for your kids to stream, so that, no matter your kids' age, you can also get a break.

SANTIAGO OF THE SEAS S1 | Recommended for ages 4+*

Join Santiago, an eight-year-old pirate, and his crew as they take on the high seas, embarking on rescues, uncovering hidden treasures and keeping the Caribbean safe.

Santiago of the Seas has a five-star rating on Common Sense Media, where it’s recommended for ages 4+. Their review calls it an, “Exceptional preschool series [that] celebrates kindness, courage,” adding that it’s “vibrant and well-rounded,” and praising its integration of the Spanish language and culture with the predominantly English dialogue.

Mush-Mush and the Mushables are putting the fun back into fungi. Join these tiny guardians of the forest as they go on adventures in the wondrous and wild world of nature.

Mush-Mush and the Mushables was nominated for a 2021 Kids Animation Emmy and has an 8.5/10 score on IMDb. In their four-star review, Common Sense Media predicts this adorable animated preschool series has the makings of a cult favourite, calling the show “a joy to watch” and saying, “Even older kids might want to tune in because there's just enough mystery, magic, and fun to keep them engaged.”

Join Mia, Tilde, and Oskar on their animated adventures in Mia's Magic Playground, the colourful show that’s heaps of fun for little ones, and teaches creative problem-solving and social-emotional skills along the way.

The series has 4/5 stars on Common Sense Media, where they say, “This vibrantly animated series is inspired by preschoolers' sense of imagination, and it’s all kinds of fun to see how the characters' creativity comes to life in the magical world they visit.”

DreamWorks' Archibald's Next Big Thing Is Here picks up the adventures of Archibald Strutter, a happy-go-lucky chicken who improvises his way through life but always finds his way home to his three siblings and trusty sidekick. It's a follow-on from the Emmy-nominated Archibald’s Next Big Thing.

Our favourite cat and mouse are back in Tom & Jerry: The Movie, which sees Jerry move into New York's finest hotel on the eve of the wedding of the century, forcing desperate event planner Kayla (Teen Choice and People’s Choice Award winner Chloë Grace Moretz) to hire Tom to get rid of the intruder. But, as mayhem ensues, their escalating cat-and-mouse battle soon threatens to destroy her career, the wedding, and possibly the hotel itself.

The 30th biggest film of 2021, Tom & Jerry earned over $127 million at the global box office, and was nominated as The Family Movie of 2021 at last year’s People's Choice Awards.

You can also binge S1-5 of the Emmy-nominated and six-time Kids' Choice Award-winning series, Henry Danger, on Showmax.

In the zany animated series It’s Pony, a normal girl's life is made extraordinary by her best friend - an unpredictable, outrageous, and hilarious talking pony. No matter the complications Pony causes, Annie knows that everything is better when he’s around.

Common Sense Media says, “Man's best friend might not be the horse, but Annie's bestie undoubtedly is Pony, and their hilarious adventures together remind kids of the beauty of unexpected - and unorthodox - friendships.”

As Annie, Emmy nominee Jessica DiCicco (Gravity Falls, Adventure Time and The Loud House) was nominated for a 2021 Annie Award, while Josh Zuckerman (90210’s Max Miller) voices Pony. Also listen out for Rosario Dawson as Principal Ramiro, Bobby Moynihan as Brian, and a cameo from Stephen Fry as Marcello Marvello.

Eleven-year-old Lincoln Loud and his right-hand man Clyde try to survive Lincoln’s ten sisters, and live in the Loud house.

In their four star review, Common Sense Media raved, “Kids will come to The Loud House for the laughs, but they'll return for the excellent ensemble cast and the surprisingly heartwarming themes.” Among other honours, the hit show has won two Daytime Emmys and been nominated for three Kids' Choice Awards as Favourite Cartoon.

You can also binge S1 of the Daytime Emmy- and Imagen Foundation Awards-winning The Loud House spin-off The Casagrandes on Showmax. The Casagrandes follows Ronnie Anne Santiago, who moves to the big city with her mother and older brother Bobby and meets her extended Hispanic family.

A young boy and his grandmother go up against a coven of witches and their leader in The Witches, a delightfully dastardly reimagining of the Roald Dahl classic, adapted by Oscar winner Robert Zemeckis (Back to the Future, Forrest Gump), double-Oscar winner Guillermo del Toro (The Shape of Water, Pan’s Labyrinth) and four-time Emmy nominee Kenya Barris (Black-ish, Girls Trip).

Common Sense Media gave The Witches a 4/5 star rating. “This campy, creepy, fun Dahl adaptation will entertain fans of the author's quirkily dark tales about kids in peril who get away from terrible adults,” they say, adding, “Zemeckis has conjured old-school magic that should be a sweet, spooky treat for families,” and praising the film’s fantastic soundtrack as well as a brilliantly vile performance from Anne Hathaway, who “chews the scenery as the over-the-top Grand High Witch” in a 2021 Kids' Choice Award-nominated role.

In Season 2 of Are You Afraid of the Dark?, The Midnight Society returns with a new set of storytellers, and a terrifying new tale about a cursed seaside town that's being haunted by a mysterious figure named the Shadowman.

Nominated for a Fangoria Chainsaw Award for Best Series, this hit Nickelodeon show has a 100% critics' rating on Rotten Tomatoes. Common Sense Media gives it five stars, calling it, “Shivery, quivery fun for tweens and teens who like scares,” saying, “Most of what scares here is the power of suggestion… [but] the scares are real.”