Settle in with DStv’s new Box Sets this March

From The Stand to A Perfect Planet, binge on a Box Set this March on DStv 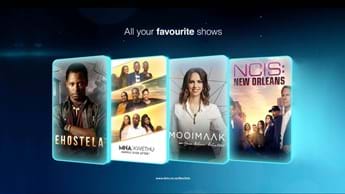 DStv’s Box Sets let you binge on your favourite shows in your own time. Now you can hold viewing marathons, replay favourite scenes and go back to check out clues. However you want to watch, that remote control is in your hands.

This March, those of us who’ve been holding back on the horror series, The Stand, because we can’t stand the weekly wait, can finally settle in for our viewing marathon. And nature documentary lovers who’ve loved Sir David Attenborough’s A Perfect Planet can see it from start to finish, replaying the incredible animal action over and over if they wish to.

With 19 brand-new Box Sets arriving in March, there is so much more to explore.

How to watch Box Sets

Sir David Attenborough presents this 5-episode series about the forces and planetary systems that drive life on Earth including volcanoes, the sun, the oceans, the weather and humankind – each of which is covered in its own episode. The research is extensive, the camera footage is quite simply incredible. The storytelling focuses on how animals survive harsh environments across the planet – from volcanic islands to alkaline lakes and deserts to snowfields. It’s an entertaining, top-notch piece of education that’ll have the whole family wide-eyed in wonder.

DStv in association with BBC Earth will be hosting a Watch & Win Competition offering viewers the chance to win A Perfect Planet book. To be eligible to enter, participants must watch BBC Earth (DStv channel 184) on Sundays at 16:00 or on Catch Up, then answer the questions posted weekly on this webpage.

BBC Earth is also giving one lucky couple the opportunity to experience the beauty of Tanzania! Simply sign up for DStv Rewards via the MyDStv app or the DStv website and enter the BBC Earth competition. Click here for more information

Binge on it from Sunday, 14 March, to Sunday, 11 April, (DStv Premium and Compact Plus)

It’s time to turn on that Southern charm and put on some jazz music straight out of the Bayou with the special investigative unit of NCIS: New Orleans. Agent Pride (Scott Bakula) and his team of Navy cops have their hands full in S7 with the COVID-19 pandemic spreading mercilessly through the city just after Mardi Gras. And to make things worse, the virus also gets aboard one of the Navy’s ships, which not only causes panic but also cabin fever. This is the final season.

Binge on it from Tuesday, 30 March, until Tuesday, 27 April, (DStv Premium and Compact Plus)

Mnakwethu: Happily Ever After S1

Find out what happened off-camera after S1 of Mnakwethu in which polygamist Musa Mseleku advised men on how to approach their wives about opening up their marriage to another woman. The first meeting between Qondanisa’s wife, Sithokozile, and his girlfriend, Samantha, erupted in a screaming match. Ngiga has a new woman in the picture. And while Dulas’s wife, MaDlamini, accepted his wish to marry MaMmhlongo, she wasn’t willing to be packed off to the rural area so that this newcomer could be the Joburg wife. Now what?

Start watching now and binge on it from Wednesday, 31 March, until Wednesday, 28 April, (available on all packages)

Mr Wednesday calls his demi-god son, Shadow Moon, to come out of hiding from the New Gods in his new, small-town home of Lakeside in Wisconsin, where he’s trying to live a normal life. Meanwhile, Shadow’s Orishas, the gods of his black ancestors, are also reaching out. This season, Shadow Moon will need to determine whether he stands on the side of the gods or humans. But more than that, the series will explore the modern American immigrant experience and the “new gods” who control their fate.

Binge on it from Wednesday, 3 March, until Wednesday, 31 March, (DStv Premium and Compact Plus)

This perfectly paced, sometimes funny and always thrilling 4-episode true-crime documentary mini-series investigates conman Richard Scott Smith. He used the Internet to prey on lonely women, marrying them and taking them for every penny before vanishing – until these ladies went looking for him… and found each other! From then on, with a tough-talking bounty hunter from Kansas named Carla on their side, they were determined to turn the tables on this love louse before he could creep into another woman’s life.

Binge on it from Thursday, 4 March, until Thursday, 1 April, (DStv Premium and Compact Plus)

Based on Stephen King’s 1978 apocalyptic horror fantasy novel of the same name, The Stand is set in a plague-stricken world where the forces of good and evil are engaged in a battle over the scraps of humanity who’ve survived. On the side of good is 108-year-old Mother Abagail (Whoopi Goldberg), who guides a handful of survivors, including an ordinary factory worker Stu Redman (James Marsden). On the side of evil is Randal Flagg (Alexander Skarsgård), the Dark Man with a sinister smile who has supernatural powers.

Binge on it from Monday, 22 March, until Monday, 19 April, (DStv Premium and Compact Plus)

Read MoreWatch now on Catch Up