Watch All Elite Wrestling on DStv

All Elite Wrestling highlights on TNT

All Elite Wrestling brings you a triple threat on TNT (DStv Channel 137) this April! 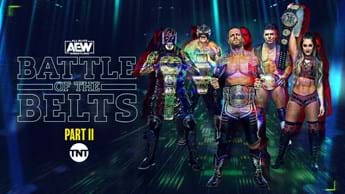 Wrestling fans, anticipation is building for All Elite Wrestling’s (AEW) second-ever Battle of The Belts, in which champions take on champions for the ultimate honours. 1 of the major attractions will be the War of The Roses, as Thunder Rosa takes on Nyla Rose for the AEW Women’s World Championship. These 2 have been talking trash about one another for a while and with painted lady Thunder Rosa defending her title, someone’s reputation is about to get slammed!

There’s also plenty of thrilling Dynamite and Rampage wrestling on the slate, even with South African-born wrestler Angélico still out of the ring thanks to that torn ACL and meniscus. Celebrities have been cheering on their favourites during the qualifying rounds for the Owen Hart Foundation Women's Tournament, with Vanessa Hudgens calling Jade Cargill an “Icon” on her Instagram Story (look out for Jade at the Battle of The Belts). And the upcoming Christian Cage vs. Adam Cole match will pit 2 giants with fascinatingly different techniques against one another. Let’s just say you’ll need to keep a close eye on Mr “likes to fight dirty!”.

Fight off the family for your ringside seat, take a flying leap at that couch, and cheer on the weekend action with AEW Wrestling every Saturday and Sunday on TNT (DStv Channel 137).

Get in the ring!

NB! AEW Dynamite airs 4 days after the matches take place in the US. There won’t be a new Dynamite episode on 17 April, but 2 new episodes will air back-to-back on 24 April.

NB! AEW Rampage airs 1 week after the matches take place in the US

TNT (DStv Channel 137) is available on DStv Premium, Compact Plus, Compact, Family, Access and Easy View. To upgrade your existing package, click here. Or if you'd like to Get DStv, find a service that suits your needs here.