A rough road to romance in 90 Day Fiancé: The Other Way S3

Jenny Slatten and Sumit Singh lift the lid on their relationship and possible wedding in 90 Day Fiancé: The Other Way S3. 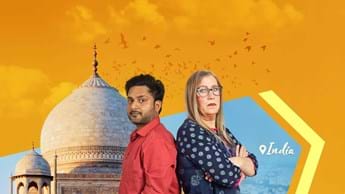 TLC’s (DStv channel 135) hit reality series 90 Days Fiancé: The Other Way is a dating show like no other. It follows US citizens, who move across the globe to meet their foreign online lovers for the first time.

But before they can walk down the aisle, the pair face a plethora of obstacles. In S3 of The Other Way, fan-favourite couple Jenny Slatten (63) and Sumit Singh’s (33) relationship goes through the ultimate test. Sumit’s mother Sadhna moves in with the couple to train Jenny to become a traditional Indian wife, which adds further tension to the already strained relationship. With Jenny close to reaching breaking point, will the couple survive? Read below to find out about their rocky road in S3.

A love that conquers all

When Jenny sold her house and all her belongings in California to pursue a relationship with Sumit, she was convinced that they would get married and live happily ever after. But that wasn’t the case. Jenny and fans were in for a shock in The Other Way S2 when it was revealed that Sumit’s parents had forced him into a “loveless arranged marriage” with another woman.

As Jenny explains, she overlooked Sumit’s arranged marriage because she believed that their love could conquer all trials. “There was a lot of emotional blackmail that was used by Sumit’s father to get him to marry this woman. Sumit and I love each other, and he didn’t love her. In fact, Sumit didn’t even know her,” explains Jenny, adding that she sympathised with Sumit at the time. “I understand arranged marriages in India, I know all about them. At the time when Sumit got married, I was already committed to him, and we discussed everything. Of course, he cried – we both cried. He went through hell. I understood Sumit’s situation because I know what an arranged marriage is about. But most of all, I know Sumit’s heart, and I forgave him.”

After many tears and arguments and more meltdowns, the couple worked through their differences and despite Sumit’s family’s displeasure, he divorced his wife.

But all Sumit’s efforts to forge a bond between his parents and Jenny to date have crumbled. And even with her visa extended due to the pandemic, Jenny is starting to lose hope in a future with Sumit.

“My parents are finally ready to come on board with my relationship with Jenny,” insists Sumit. “In order for them to understand how much Jenny and I love each other and how we interact; my mother moves in with us this season. It’s a big step as I’ve been separated from my family for a long time,” adds Sumit. However, as the season develops, Sadhna’s presence pushes Jenny and Sumit apart…

When Jenny is asked about what it’s going to take to convince Sumit’s family to accept her, she says: “A miracle. “I’m starting to run out of ideas. I don’t know if it will even ever happen. Sumit and I aren’t going to stop trying, though.”

Do we hear wedding bells?

In S3, Sumit and Jenny hope to get married but COVID-19 restrictions have put a pause on their plans. “We’d like our loved ones [from the States and India] to attend the wedding. We want everybody to be happy for us,” says Sumit who goes on to describe his ideal wedding: “I’m certain that Jenny wants the same, but I’d like an Indian wedding ceremony – a big, over-the-top occasion, along with other rituals and ceremonies.” Jenny shares her fiancé’s sentiments regarding their dream wedding. “But that can only happen when it’s safe to travel.”

Jenny reveals that her standout moment in S3 is when she visits a Hindu temple. Throughout this season, she explores Sumit’s religion. “Well, I didn’t really convert [from Christianity], I’m just following Krishna. Anybody can follow Krishna. You don’t have to convert into anything – they don't ask you to convert or anything. It’s just something that you can do on your own,” explains Jenny. She explains that her experience on the reality show has taught her an important virtue: patience. “I mean, I’m pretty strong. I’m learning that about myself. I never thought I was such a strong person, but I am, and I can pretty much deal with anything. I've also learnt that I’m very patient and understanding.”

Now it looks like she’ll have to practice those virtues a little longer!

TLC is available on DStv Premium, Compact Plus, Compact, Family and Access. To upgrade your existing package, click here. Or if you'd like to Get DStv, find a service that suits your needs here.