Choose Joy for the kids with these must-watch festive specials 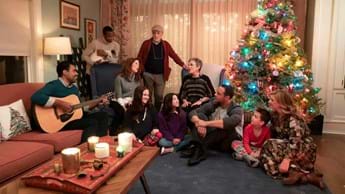 DStv’s kids shows are here to sleigh the holiday season! There’s something for kids of all ages, including shows you can watch together when you Choose Joy for your family with DStv this festive season.

The brand-new Disney movie Christmas Again? will ring a bell with tweens who’re learning to live in blended families, while little kids will learn (and laugh) about being good to stay on Santa’s Nice List with shows like Bluey and Dora The Explorer.

And there are marathons of Christmas and holiday special episodes from across the channels in DStv’s School of laughter, along with a holiday spectacular from Nickelodeon, that sees characters from a range of different shows coming together, and a Bugs Bunny’s 24 Carrot Holiday Special, which features all the looniest cartoons messing up their seasonal celebrations in silly way.

December is gift wrapped for kids on DStv, and you can find many more kids’ shows already waiting for you on DStv Catch Up.

In this brand-new Disney movie, 11-year-old Ro (Scarlett Estevez) is expecting a dismal Christmas thanks to her parents’ recent divorce. But when she makes a special Christmas wish, she finds herself living Christmas Day all over again… and again… and again. In order to break the loop, Ro must learn to love her new blended family.

4 December: Adventure Time Distant Lands Wizard City: Peppermint Butler enrols at Wizard School to attempt to relearn magic but he’ll need to find a way to prove his innocence when rumours about his past start spreading.

11 December: LEGO DC Comics Super Heroes: The Flash: Reverse-Flash manipulates the Speed Force to put The Flash into a timeloop, so he has to re-live the same day over and over again.

25 December: The LEGO Movie: A prophecy claims that Emmet, an ordinary working construction man, can save the LEGO world from the cruel Lord Business.

Mickey & Minnie Wish Upon A Christmas

Mickey, Minnie and the gang wind up split all over the world after a series of mishaps, and they must all try to get back to Hot Dog Hills by Christmas Eve. Then a jolly stranger tells them about The Wishing Star, which could be the key to bringing everybody home in time to celebrate the holiday together.

Also look out for the following Disney Christmas classic movies:

20 December at 09:30: PJ Masks: The PJ Masks step up to help children when Luna Girl, Night Ninja, and the Wolfy Kids steal their Halloween treats in this Halloween special episode.

20 December at 10:00: Mickey Mouse Funhouse: Mickey, Minnie and their friends return a baby gorilla to the Enchanted Rainforest. Then Mickey and Goofy take Pluto and Teddy to Prehistoric Land.

24 December at 11:30: Mickey Mouse Clubhouse: Mickey and his friends set aside their Christmas Eve celebrations to help Santa Claus when his sleigh breaks down.

24 December at 13:00: Doc McStuffins: Doc and the toys travel back in time to the North Pole to save Christmas.

24 December at 14:00 Elena Of Avalor: Elena wants to have a quiet Navidad at home, but a snowstorm strands her friends at the palace.

24 December at 14:30: Puppy Dog Pals: The pugs go on a mission to find Santa, and Bob asks Bingo and Rolly to protect a snowman he’s building.

24 December at 06:25: Topsy & Tim: 5-year-old twins Topsy and Tim decorate the tree on Christmas Eve with mom, dad and granny, and the even see Father Christmas on his sleigh.

Christmas-themed episodes of your favourite shows

Barbapapa – One Big Family: Barbapapa trolls the children about how he met Father Christmas

Peppa Pig: Peppa and George make snowmen and throw snowballs; Peppa wishes for everyone to get the presents they want and longs to see Santa; and Peppa’s playgroup puts on a Christmas show.

Paw Patrol: The pups go snowboarding, puppies help Santa to deliver presents after his reindeer bolt, the pups save the day on a snowboard course, and Everest takes care of a wolf cub during a blizzard.

Santiago of The Seas: Santiago learns to appreciate his crew after Bonnie Bones steals the treasure chest, and Santiago’s crew saves a baby monkey.

The Adventure of Paddington: Paddington gets to visit the fire station.

Blaze and The Monster Machines: The friends try to help Darington recharge for a trip to the moon, and Blaze and his friends compete in the Hundred Mile Race.

Butterbean’s Cafe: Dazzle and Poppy swap jobs, and everyone tries to cheer up Ms. Marmalady.

Blue’s Clues & You: It’s the night before Christmas and we try to figure out what Blue wants.

Dora The Explorer: Dora asks Santa to take Swiper off the naughty list.

For one glorious fortnight, Teen Titans fans will be able to see 6 episodes per day, of each which are centred around a single character. Mondays are Robin, Tuesdays are Starfire, Wednesdays are Beast Boy, Thursdays are Raven, Fridays are Cyborg, Saturdays are a special mix of celebration, Christmas and party episodes, and Sundays are Batman & Bumblebee.

See special holidays episodes from Henry Danger, The Thundermans, Game Shakers, SpongeBob, The Casagrandes, Nicky, Ricky, Dicky &, Dawn and School of Rock. You’ll also see the premiere of 2 brand-new episodes of Danger Force. Look out for the saga when Danger force squares off with the evil Krampus to save Santa in a special 2-part story!

Nickelodeon’s shows and casts collide. Lex Lumpkin (from All That) travels to the North Pole to meet Santa Claus. With Gabriel Iglesias, Jay Pharoah, Tisha Campbell, Trevor Noah, Young Dylan and the casts of All That, The Astronauts, Danger Force, Group Chat and Unfiltered, and special messages from animated characters like SpongeBob SquarePants.

The Treehouse Stories: The Christmas Feast. A wolf, a fox and a weasel have a Christmas feast with a turkey.

Darwin & Newts: It’s Snowing in Kiwifruit Valley. Darwin and Newts discover that every snowflake has 6 sides.

Darwin & Newts: Kiwifruit Valley Christmas. Our friends work together to create a Christmas celebration full of aroha after a Christmas Eve storm wrecks the festive preparations.

Do You Know? At Christmas. Maddie meets Santa’s favourite helper, the reindeer, and discovers how Christmas decorations are made!

Did You Know? Making Christmas Special. Tips on decorating, and spotting fake money and gifts.

And look out for Movie Stars Special Holidays, Mondays-Fridays from Monday, 20 December on Boomerang (DStv channel 302) at 09:55. African kids will be sending short holiday messages and greetings.