A touch of Magic on DStv’s School of Laughter, 26 November-3 December

Watch A Magical Journey, Blaze and The Monster Machines, and The Bureau of Magical things this week on DStv’s School of Laughter 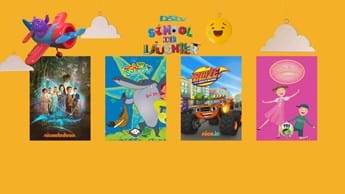 The school holidays are just around the corner, and DStv has all the kid-friendly entertainment that busy parents need to help keep everyone entertained at this crazy time.

The Saturday movie blockbuster for kids on M-Net (DStv channel 101) is A Magical Journey sees a young orphan girl on an adventure to find out the truth about her family, so maybe Mom and Dad can think of some fun family stories to share after the movie.

Kids shows this week will also keep the little munchkins busy with new episodes of Blaze and The Monster Machines, as well as The Bureau of Magical Things. It sounds like a real kid’s paradise, so why would you want to be anywhere else?

An 11-year-old orphan named Polina goes on a magical journey to find the truth about her past and her family. While on her adventure, she realises that she has less than 24 hours before her 12th birthday to find out the truth about her parents – and avoid the nasty intentions that her aunt and cousin have in store for her.

The Bureau of Magical Things Season 2

In a new episode of this live-action kids’ series about three witches, after Lily casts a spell over a music video that Peter has filmed to help Ben’s career, everyone who sees the clip starts to sing and dance.

Watch The Bureau of Magical Things Season 2 on Wednesday, 1 December on Nickelodeon (DStv channel 305) at 18:30

Blaze and The Monster Machines Season 6

Tune in to a new episode of this kid-friendly animation series in which race car Blaze and his sister, Sparkle, team up to make it back to the Monster Drome in time for the ultimate big race.

Watch Blaze and The Monster Machines Season 6 on Saturday, 27 November on NickJr (DStv channel 307) at 05:16