We crash the drama of Departure S2 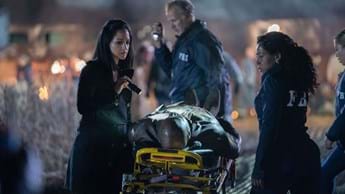 Kendra Malley (Archie Panjabi) is sent to investigate when high-speed, high-tech, fully automated train The Apollo derails in rural Michigan during its first time on the tracks. Aside from running the crash investigation, soon Kendra is having to juggle local law enforcement, the FBI, two murder cases, a fugitive on the loose, a politician on the make, the train’s tech billionaire inventor, and a list of dead, dying and horrified rail passengers.

Read on as we speak to Archie Panjabi about what to expect in the thrilling brand-new season of Departure.

All aboard for Departure

What’s Kendra’s state of mind at the start of S2?

Archie: In S1 Kendra was still deeply affected by the loss of her partner in that tragic car accident. I think in S2 she’s in a slightly better place because she’s been recruited over to America and is now working with a new group of co-workers. I think it is refreshing for her. One of my favourite parts of filming S2 is there’s a lot more character development. Kendra encounters so many different characters during her investigation and she develops with each of them a relationship which is explored over the course of the series. Hopefully you’ll learn a lot more about Kendra’s character through those scenes.

What most impressed you the first day you walked onto the train wreck set?

Archie: T.J. Scott [the director] did make it very cinematic – so you had smoke and fire – but I think one of the most powerful scenes is when you actually see after the crash itself and there are so many people. There were some great moments with actors who were really invested in those roles of having just gone through a train crash. And I remember constantly going up to each of them asking, “Are you ok?” because they were so good. A number of them would turn around and say, “I’m absolutely loving this because we don’t get to do this normally, to really immerse ourselves into these characters that have just encountered a train crash, and then going off to hospital, and being seen there…” You know they really loved it.

For me, it was the scenes of seeing people in pain (that made the greatest impact)… There was one lady that was pregnant and stuck under a train... Seeing those scenes was pretty horrific. Let alone the debris in terms of the whole train being flipped over. So, it's quite horrific for some of those scenes.

Christopher Plummer was working from home due to COVID restrictions, how did you actually film Kendra’s scenes with Howard?

Archie: Well, the great thing about Christopher Plummer is he’s such a joy to work with. At the end of S1 Howard did something quite unforgivable, so this season – conveniently – he has a lot of his scenes with Kendra on the phone, and those are scattered throughout all the episodes. When we were filming the phone calls it felt like he was just next door. We didn’t struggle with those, and those phone calls are some of my best and favourite scenes, even though he wasn’t on the other end of the phone with me, and I wasn’t on the other side of the phone for him.

So you filmed the scenes listening to each other’s recordings?

Archie: Yes, because we knew each other quite well from S1 that helped innately. We knew each other’s energies and had spent so much time together that it felt effortless.

Is there any element of your personality in Kendra?

Archie: Growing up in England, my parents were encouraging of celebrating Christmas and being respectful of Diwali or Eid, to understand all cultures, all faiths, all people from all walks of life irrespective of their class or their sexual orientation – and do I feel there’s probably an element of me, which is why it was not such a challenge for me to step into the shoes of Kendra, because that’s what Kendra does. She meets people under unfortunate circumstances but has to be able to not judge them and be respectful and connect with them.

Kendra has a special relationship with Dominic. Is it possible to have that on TV without leaning towards romance?

Archie: One of my favourite aspects of S1 was the relationship between Kendra and Dominic. I was really happy they didn’t take it down, what you would have expected them to have done – to make it romantic. And I think what you see in S2 is that the lines are slightly blurred but – without giving too much away – I think that relationship is developed further. That doesn’t necessarily mean that it turns romantic or anything else happens – you have to wait to watch it to see – but it is developed in a very interesting way, which I really like. It is unique – let’s say that!

How do Kendra’s encounters with the right-wing militant character Tyler Brick (Greg Bryk) translate from reading the script versus playing it opposite the actor?

Archie: I remember when I finished working with him, I was pretty shaken up. Often when they say “cut” it gives you a minute or two to come out of a character. But he was so good and so intimidating that it actually took me a little bit of time to really adjust myself, compose myself before going to another scene – which was probably from a completely different episode and one in which I was a lot calmer.

What kind of research did you do for S2?

Archie: I did a little bit of research to understand the high-speed train and the automation software. I spent more time actually on carving out the relationships because all the technical stuff was quite self-explanatory in the script, but for me it was just spending more time on how to develop relationships with the different actors. For example, one of my favourites is Karen LeBlanc who plays FBI Special Agent Hunter – and when the two of them meet they are very suspicious of each other, because Agent Hunter doesn’t reveal her true reason for being there. That relationship really develops in quite an exciting way. They’re two strong, very powerful, intelligent women, but we get to see them have this banter that as an outsider you probably would think they were sisters. So, I think the time was more spent on the relationships rather than the technical aspect of it.

Universal TV (DStv channel 117) is available on DStv Premium, Compact Plus, Compact and Family. To upgrade your existing package, click here. Or if you'd like to Get DStv, find a service that suits your needs here.