Hype your fave for The E! People’s Choice Awards African Social Star of 2021 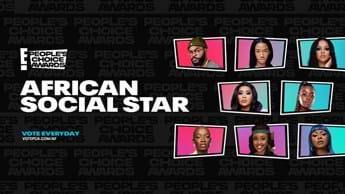 Can anyone challenge the might of Senagalese-born Italian TikTok superstar Khaby Lame? E! (DStv channel 124) has gathered eight impressive African social media stars who’ve entertained, outraged and got us laughing and talking in 2021. They’ll be following in the footsteps of last year’s winner Elsa Majimbo from Kenya, and 2019’s winner, South Africa’s own Bonang Matheba.

The official voting window is from 27 October to 17 November. Fans can vote up to 25 times per day, per category, per method (voting website and Twitter). On 9 November, the votes will count as double, equalling up to a maximum of 50 votes per category, per voting method. For Twitter votes: posts must be public to count. Posts count as a vote if the category hashtag (#AfricanSocialStar) and a corresponding nominee hashtag are used together in the same post. For example:

Check it out! I voted for #NomineeName as #AfricanSocialStar at the People’s Choice Awards! #PCAs

You can cast your vote on http://www.votepca.com/af

And the nominees are…

Boity says: “Receiving this nomination is honestly a dream come true! I feel so honoured that the work that I do is being celebrated on such a massive platform. From the bottom of my heart, thank you!”

Mihali says: “It’s truly a fortunate moment for me to be nominated for this award on such a prestigious platform. Hopefully we’ll take this one home, it isn’t for me alone but for other creatives that need to fight for recognition and respect in the entertainment space.”

Witney says: “I am so honoured to be part of something this big. Just being recognised is the highlight of my life. I am so grateful and I will continue inspiring young girls out there to be a better version of themselves and be confident in their own skin. Anything is possible.”

Falz says: "It’s a great honour to be nominated for this award, and I am really excited that the good people at E! considered me for this. I have always considered social media a place where I can have fun, connect with people from different parts of the globe and most importantly, effect social change. I am proud of the changes we’ve been able to effect in the past year in Nigeria and how we’ve spoken truth to power. We couldn’t have done it without crowdsourcing ideas on social media and working together as one. I am really proud of that as well as this nomination."

Azziad says: “I'm excited and honoured for my nomination. This goes out to the dreamers... you're never too young to start working on your dreams.”

Tyra says: “Thank you for the nomination and what a surprise to my team and myself. I would like to express my genuine happiness for receiving this nomination. 2020 and 2021 have not been easy as the world over people have been dying due to the COVID-19 pandemic. All we (the Madam Boss team) wish for is life and a quick recovery to anyone affected. Being nominated for such a prestigious award means a lot and we are excited and grateful. If I win, I win together with my fans and those we have associated with.”

The Odditty says: “In the infamous words of Chizi Duru, YOU CANNOT TALK TO ME ANYHOW! I am so honoured to be nominated for this award and dedicate this to everyone who has fought so hard to be unapologetically who they are. WE DID IT!”

E! (DStv channel 124) is available on DStv Premium, Compact Plus and Compact. To upgrade your existing package, click here. Or if you'd like to Get DStv, find a service that suits your needs here.