Hondo in conflict in S.W.AT S4

Shemar Moore talks about truth and consequences for “Hondo” in S.W.A.T S4 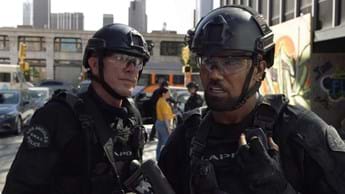 Shemar Moore’s character Daniel “Hondo” Harrelson has always walked a delicate line in S.W.A.T. On one hand, he is a dedicated officer of the law. One the other hand, he has seen how law enforcement can fall prey to the same prejudices that plague the rest of society, and how police violence, racism and bigotry have impacted African American communities in Los Angeles, corroding the relationship between society and the police.

“[Hondo] believes in doing good, he believes in fairness. We maintain humanity, authenticity, integrity, and we discuss current issues, which the world is going through – and that viewers can relate to,” Shemar says. “We get into controversial subjects, and we don’t tell you what to believe in. But our show does a good job at exploring those topics and then viewers can then make up their minds about them.”

At the same time, viewers can expect a thrill ride while watching these super cops do super cool things, says Shemar, who is one of the series’ producers, as well as being its leading man. “You’re going to have car chases, motorcycle chases, fight scenes, and helicopters in the air. It’s always a good time watching S.W.A.T.”

How has Hondo evolved through the seasons and into his role?

In the pilot episode, a black kid was shot by a white cop, who was Hondo’s mentor. To defuse the matter, the department placed a person of colour in charge, which was Hondo. So, then the question became: is Hondo the guy for the job or is he just there because of the colour of his skin? What you see throughout the series is Hondo constantly having to prove that he is the man, and that he is capable.

The earlier Hondo was this inspirational character who defied the odds and he settled into his leadership position.

In which way does Hondo go about bringing transformation in law enforcement?

He believes that the system is against him, a lot of the time, and he’s always fighting the machine. When you become successful, there are entities and people who will try to knock you down and you should stand firm and fight against that.

But there are moments where Hondo doubts himself?

For the very reason he was promoted to sergeant of the task force [for being a person of colour], it’s the same reason they knock him down [for speaking on issues that affect people of colour].

Hondo runs into hurdles along the way, and he thinks: “Wait a minute, I fought so hard. You know, is the fight even worth it? What is my purpose? Was it all for nothing?” He was trying to make a change and he comes to question whether he is changing anything at all. You’ll see him fight to get his resolve back, fight to get his purpose back. I think there’s something interesting that people can relate to because you’ll be rooting for him. If this hero succeeds, it makes you feel like you too can succeed.

How will he stop himself from throwing in the towel when things get tough while fighting the system?

If Hondo quits or gets beat, then where’s the dream? It’s interesting that with such a fun show, there are layers to the character that I play, which makes him the hero. It’s like with former professional basketball player Michael Jordan, Hondo just does these magical things that will leave you saying: “Wow, I want to be like that.” And when people watch Hondo – me portraying Hondo – they’re like, “I want to be like that. Hondo is amazing. He isn’t afraid of anything.” And I like that. I enjoy playing inspirational characters, and I think Hondo is very inspiring.

How do you relate to Hondo’s internal struggle?

I’ve worked really hard, and I don’t take anything for granted. I’ve been acting for 30 years, and I’ve always put pressure on myself to lead, be consistent and continue to grow and get better at my craft – and also, become a better man. I always feel like I have to prove my worth to stay in this game. Whether it’s playing Hondo, Derek Morgan in crime drama show Criminal Minds, or Malcolm Winters in soapie The Young And The Restless, I extend all that energy, experience, and pressure, to the characters that I play.

As a sneak peek, what has been it been like filming S5?

We want to be a show that you watch and feel good and smile. This season, we find S.W.A.T in Mexico. In S3 we were in Japan, and in S2, we were again in Mexico. There are talks that we might film in Ireland in future. Taking the show around the world is an honour. What I love is that we have a lot of fun on set… Outside of parents who don’t want to see their children watching guns and gun violence, S.W.A.T isn’t a violent show. It’s exciting, like a movie. We’re like a fun movie. It’s like watching the Fast & Furious franchise but you get to watch it every week on TV.

M-Net is available on DStv Premium. To upgrade your existing package, click here. Or if you'd like to Get DStv, find a service that suits your needs here.