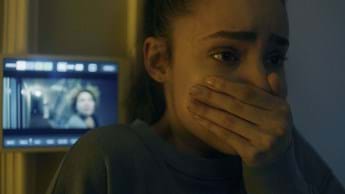 Life has changed since COVID-19 reared its ugly head, but what if things got even worse? Filmmaker Michael Bay takes a creative look at this scenario in his brand-new thriller movie Songbird in which a new threat has taken over the world and lockdowns are much tougher… Be warned, it’s not for sensitive viewers.

And another edgy thriller on DStv’s movie menu, Dragged Across Concrete, will give action lovers an energy boost as two rogue cops, played by Mel Gibson and Vince Vaughn, take on the underworld with money in mind.

In this dystopian sci-fi thriller, bike courier Nico Price (Riverdale’s KJ Apa) who’s immune to the mutated COVID-23 virus, races to save his young love, Sara Garcia (Sofia Carson), after the “sanitation department” arrives to take her to a concentration camp because she’s tested positive for COVID-23. Produced by Michael Bay.

Make sure you tune into this crime thriller about two overzealous cops that get suspended from the police force and delve into the criminal world to get the proper compensation they feel they deserve. Starring Mel Gibson and Vince Vaughn.