The best of international series on DStv, 22-28 October

Chilling arctic drama in The North Water, a double dose of NCIS and more this week on DStv 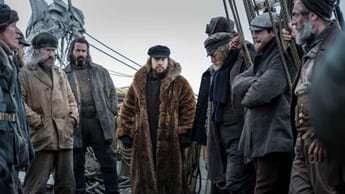 Actor Colin Farrell gives a chilling performance as a psychopathic harpooner in the British series The North Water, and the man who puts a lot of trust in his gut feeling, Special Agent Gibbs, is back for the 18th season of NCIS, which brings you double the drama each Thursday.

And don’t miss the new telenovela Mismatched on StarLife (DStv channel 167), in which two unlikely people with different world views clash in all things from life and love to happiness.

Shows to rock your boat

In the mid-1800s, Patrick Sumner (Jack O’Connell) joins The Volunteer as a ship’s surgeon for an Arctic whaling trip, where he enters a battle of wits with the ship’s psychopathic harpooner, Drax (Colin Farrell).

Special Agent Gibbs (Mark Harmon) and his team of naval investigators are back for a new season that kicks off with a bang as the team investigate the whereabouts of a missing body, and Gibbs helps his friend and former FBI agent Fornell to track down the leader of a drug ring that supplied drugs to Fornell’s daughter.

Anokhi runs away from her forced marriage so she can continue the studies that her sexist father denied her. Meanwhile, Shaurya, a college board member, grew up believing that his mother abandoned the family in favour of his career and now insists that a woman’s place is in the kitchen.