kykNET drama series Nêrens, Noord-Kaap is steaming ahead with a family at war & three brothers who’re called back home by their estranged dad 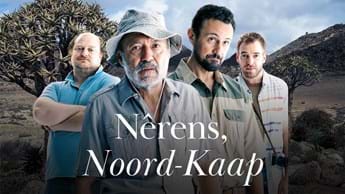 If you’ve not started watching kykNET (DStv channel 144) drama series Nêrens, Noord-Kaap, Tuesdays at 20:00, you’re in luck – you can watch on catch up or wait for the complete Box Set and binge in one sitting.

The English-subtitled series is set on the drought-affected farm Nêrens in the Northern Cape, with widower Lourens Adendorff (Frank Opperman) at the centre of a family storm with his three estranged sons – Frans (Geon Nel), Ronnie (Albert Pretorius) and Andres (De Klerk Oelofse) – and how he’s haunted by both his past and present.

Here’s a quick catch up on where we are, letting you jump right into the drama…

Lourens is a bitter old man. He sits in his lounge all day drinking and listening to music on an old-school record player. You know, the kind that sounds all scratchy as the LP goes around spinning on the needle.

He’s no longer in charge of his farm. He’s left that up to Frans to manage the day-to-day business. Lourens now wallows in his self-pity and has visions of his past, with his beloved deceased wife, Katja (Tinarie van Wyk-Loots), and their sons when they were still boys. “Playing Lourens is one of the highlights of my television career,” says Frank. “I’ve watched the stage play Nêrens, Noord-Kaap [on which the series is based]. It’s one of my favourites, and it stayed in my mind for a long time. I felt like a newcomer because the boys – Geon, Albert and De Klerk – are reprising their roles from the play. But I realised that I’m here to play their father and it was interesting learning the regional dialect. I watched YouTube videos to learn how Namaqualanders speak.”

Lourens has come to terms with his situation – that his sons want nothing to do with him. He’s a man of few words, depressed and a recluse. He barely speaks to the workers living on his farm and in episode 7 he suffers a mini meltdown when his helper, Maggie (Ilse Klink), and her kids play with Christmas decorations. It’s not upsetting for Lourens because he’s a Grinch, but rather because he has flashbacks of his family’s Christmas and how he ruined things for everyone.

The three brothers are in very different parts of their lives.

Baby brother Andries and his Dutch wife are struggling with their lives close to the farm now that they’ve moved and it’s Christmas. They’ve got no tree, no lights, no presents – but they do have each other and the festive cheer. It’s a difficult time for the family but they’re trying to make it work. Andries even makes a “child” that he names Boris – it’s a soccer ball on two logs. It’s bittersweet seeing the youngest Adendorff son in this situation and his child-like personality endears him to viewers. Hopefully the second half of the season will treat him kinder.

Eldest son and farm manager Frans might not verbalise his depression and his regrets, but they’re clearly etched on his face. He’s spent the season (and years before that) trying to communicate with his dad but there’s a block there. “He feels that he’s missed out on so much in life,” explains Geon. “He lives in a dream world and he’s struggling to distinguish between reality and his ideals.” That hasn’t stopped him from doing his job and he’s kept the farm more or less running because he has a strong sense of duty despite his personal worries.

Middle son Ronnie is living in Milnerton and he’s got very little to do with the family farm. That doesn’t mean he’s not in touch with his brothers – he and Frans get along. In episode 7, they even share a drink when Frans pops in for a visit, but it’s clear that they’ve not seen each other in years – Frans barely recognises his nephew who was only a toddler the last time he saw him, rather than the tweenager standing before him now.

They say that blood is thicker than water, but it’s going to take time and effort if the Adendorff men are going to be able to call a truce in their family feud as the rest of Nêrens, Noord-Kaap plays out.

kykNET (DStv channel 144) is available on DStv Premium and Compact Plus. To upgrade your existing package, click here. Or if you'd like to Get DStv, find a service that suits your needs here.