The Secret: Dare To Dream, The Secrets We Keep and so much more movie magic to enjoy on DStv this week. 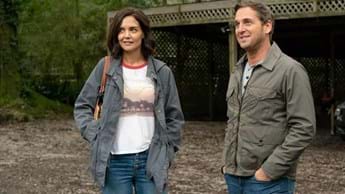 Pop the popcorn and get comfortable with two movies coming to DStv that will hit the right spot!

The Secret: Dare To Dream is an epic Sunday-night M-Net (DStv channel 101) blockbuster about a widow who turns her family’s bad luck around when she invites a positive-thinking professor into her life.

And another secret is on the cards on the online streaming platform Showmax with The Secrets We Keep, a thriller set just after World War II where revenge is a dish best served cold.

Can you keep a secret?

The Secret: Dare To Dream

Drama based on Rhonda Byrne’s 2006 self-help book The Secret. Hard-working widowed mom Miranda Wells (Katie Holmes) unwittingly turns her family’s bad luck around when she invites engineering professor Bray Johnson (Josh Lucas), who believes in positive thinking, to dinner after the 2 have a traffic accident.

The Secrets We Keep

Noomi Rapace drives this suspense-filled, intriguing thriller set after World War II. A woman kidnaps and exacts revenge on a neighbour who she believes subjected her to unimaginable atrocities during the war. Starring Noomi Rapace, Joel Kinnaman, Chris Messi and Amy Seimetz.

Watch from Thursday, 21 October on Showmax