Die Broer Toer: the Fourie brothers on the road again

The Fourie brothers are on the road again in Die Broer Toer. Watch it on kykNET (DStv channel 144) 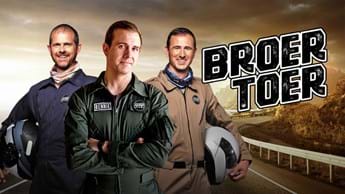 What happens if an actor, a reverend and an entrepreneur take their motorbikes and go on tour? Moreover, what if they are brothers? All will be revealed in kykNET’s new series Die Broer Toer, airing Tuesdays at 21:00 on kykNET, DStv channel 144.

In 2020 viewers had a taste of what was to come when the brothers travelled to the Tankwa Karoo and filmed a pilot episode. Viewers responded positively and the brothers immediately started planning their 23-day adventure.

“It was an absurd experience to bring together the three loves of my life – family, film and adventure,” says Bennie, known for his roles in G.I.L., Hotel and Vuil wasgoed.

“We go far, we go deep and we go for gold while we laugh and do what brothers do best,” says Reynold, the reverend in the group.

In the first episode of the series, Bennie has a surprise for his brothers and they take the road to the Koue Bokkeveld. Their first challenge waits: the Bike Jimkana. In the second episode they travel through the Cederberg to the Biedouw Valley and in the third episode they explore the West Coast.

Other places that the brothers visit include Groenriviermond, Hondeklipbaai, Holgatrivierloop, the Orange river at Vioolsdrift, Riemvasmaak and the salt pans and dunes of the Kalahari.

Each episode has its own challenges – from challenges that the brothers set each other that puts more pressure on them, to mechanical and medical problems. The brothers are also going to take time to discuss topical issues.

“I would like to see that people who watch the programme not only laugh, but become emotionally invested in our adventures and impulsively decide to jump in their bakkie and go on an adventure with people they love,” says Wilbrie.

To travel is not new to the Fourie brothers. They started travelling together when they were at school and at university they bought a bakkie with which they travelled in South Africa and some of our neighbouring countries. So buckle up and get ready because now is your chance to be their fellow traveller!