Black Tax, a new host for Behind The Story & more local TV on DStv this week. 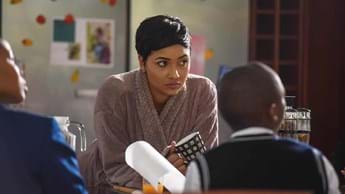 Our stories, our families, our people! DStv’s local series take you inside South African lives, through the eyes of young filmmakers in KZN, to celeb lives, to a family battling the ins and outs of Black Tax.

Jo-Anne Reyneke is back as estate agent single-mom Thuli, who must carry her family financially in the comedy Black Tax on BET (DStv channel 129). This local gem will have you screaming with laughter and coming back for more each week on BET. Black Tax episodes also air on Showmax just after the series airs on BET each Saturday. And you can catch up on Black Tax S1 on Showmax right now.

Influencer and local celeb Nomalanga “The Flame” Shozi takes the reins as the host of popular celebrity interview show, Behind the Story. And there’s movie magic from fresh KZN talent in the film series 7 Deadly Sins on BET (DStv channel 129).

Over on Mzansi Magic (DStv channel 16), two brand new movies await. Umculo Emoyeni introduces viewers to Mpumi who is musically gifted but hides her passion for music from her father. She has a fateful encounter with an old Jazz legend. This chance meeting unravels truths about her past.

And in Babumfundisi, a Pastor adopts his sister-in-law’s child because he can’t have children. His wife loses her job which leads to the Pastor being unable to pay his in-law to keep his secret.

Single mom and estate agent Thuli (Jo-Anne Reyneke) is back – carrying the extended family on her back financially. This season Thuli’s headed for night school to boost her career. And new performers join the cast, including Owen Sejake as neighbour Bra Hugo, and Motlatsi Mafatshe as Hugo’s son and Thuli’s potential love, Nkanyiso.

Behind The Story S5

Nomalanga “The Flame” Shozi takes over the interviewer’s seat from the lovely Pearl Thusi as she gets personal with some of the biggest names in South African entertainment. This season, The Flame plays taxi driver as she picks up local celebrity guests and drives them around Joburg’s key sites and landmarks while holding intimate conversations.

This series of short films, made by seven different KZN-based production companies, centres on the theme of the seven deadly sins. Episode 1 looks at Cathy, who suffers from clinical depression and is about to attempt suicide. But someone interrupts her as she is about to jump off a roof.