What to Watch on DStv Family in October | Series

Get into the story on DStv Family this October

Nurses S2, Housemaids, new telenovelas and so much more to enjoy on DStv Family in October 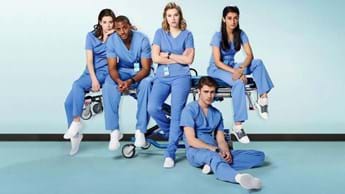 Gather round, DStv Family, it’s time for a story to take your mind off the everyday.

There are fresh new faces when Nurses returns and medical friends, if you’ve ever wished you could karate chop someone, you’re about to meet your hero. Then if you’re longing for a good gossip with people who know what it’s like to work hard, local comedy series Housemaids is here to dust away your blues.

And then there are four new international telenovelas to fall in love with as they sweep you into a world of romance, bravery and adventure.

All this and more on DStv Family this October.

Canadian nursing drama series. A new group of interns joins the staff of St. Mary’s hospital in Toronto. There’s a new nurse manager, Kate Faulkner (Rachael Ancheril), whose secret karate skills quickly come in handy. The hospital deals with a child kidnapping, and we find out how weird life can be on the night shift.

This comedy series follows the lives of three women, Providence, Gog Vicky and Bonang. They come from vastly different backgrounds but have one thing in common – they work as housemaids in the same complex. Listen in as they discuss their own drama, and drop a few secrets about their employers and family, too.

This telenovela explores arranged marriages. Middle-class woman Vidhita hopes that her rich husband-to-be, Pushkar, is a loving and compassionate man. And it would seem that he is, but appearances can be deceptive. Fortunately, Pushkar’s mother takes Vidhita under her wing and realises that while he’s a good son, he’s not necessarily a good husband.

18-year-old Kalyani winds up in the custody of her kind and loving former stepmother, Anupriya, after her father is arrested for her mother’s supposed murder. And the family drama gets juicier when Kalyani is forced to marry her runaway cousin’s jilted husband, Malhar, and raise the estranged couple’s baby.

Prepare for an epic clash. Anokhi runs away from her forced marriage so she can continue the studies that her sexist father denied her. Meanwhile, Shaurya, a college board member, grew up believing that his mother abandoned the family in favour of his career and now insists that a woman’s place is in the kitchen.

A Shelter For Love S1

After her mother’s death, beautiful young Luciana flees to Mexico City to escape sexual harassment from small-town tyrant Don Aquiles. Unfortunately, the only work she can find is in a rough tavern. But when she winds up in court for assaulting a creep, Claudio the attorney offers her his unconditional help.