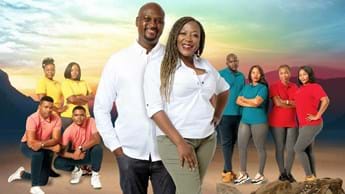 DStv has a glittering October lined up for Compact subscribers. We’re rolling out the red carpet live with the 2021 BET Hip Hop Awards and the crowning of a new Miss South Africa.

Look out for the 20th anniversary return of Who Wants To Be A Millionaire, now hosted by Jeremy Clarkson. There are two spooky season special series: Alyson Hannigan hosts Outrageous Pumpkins, while The Big Bake gives us four creative monster-cake themed episodes and more.

If you just want to see people living their best lives, look out for Nomalanga “The Flame” Shozi chatting to her celeb friends in the new season of Behind The Story. Faith “Queen Twerk” Nketsi is back with a new season of Have Faith.And see how the other half lives in Below The Deck: Sailing Yacht and new The Bradshaw Bunch. If glam houses are your jam, there’s George Clarke’s Remarkable Renovations, and HGTV’s (DStv channel 177) Outgrown and Selling the Big Easy.

Love human drama? From families in crisis to true crime, it’s here. Local series Away For Repair sends pairs with problems into the wild to fix things, Face 2 Face busts love triangles, and SA’s most glamorous traditional healers are back in Izangoma Zodumo. And three returning true crime series will show you Halloween’s real monsters.

All this and more on DStv Compact this October.

Cardi B, Megan Thee Stallion, and Lil Durk lead with nine nominations each, followed by Drake with eight. Lil Nas X is nominated for Best Video for Montero, the late Nipsey Hussle and Jay Z are up for Best Impact Track, and South African Nasty C is up for Best International Flow.

It’s time for the dazzling pageant finale! See the top 10 take centre stage and we say goodbye to Miss South Africa 2020, Shudufhadzo Musida, before Miss South Africa is crowned live at the Grand Arena, GrandWest in Cape Town, in a ceremony hosted by Anele Mdoda and Nico Panagio.

Professional baking teams have just five hours to design, bake and decorate epic cake creations for a cash prize, starting with four Halloween episodes in which they must bake sensational cakes with the themes monster, trick or treat, witch, and pumpkin. Hosted by Brad Smith, with judges Harry Eastwood and Eddie Jackson.

Who Wants To Be A Millionaire With Jeremy Clarkson S1

15 Questions, four lifelines and £1 million (over R20 million now!). This tense quiz show is back for a special 20th anniversary edition with a new host: The Top Gear man himself, Jeremy Clarkson. And there’s a brand-new lifeline: Ask The Host!

The Great Pottery Throw Down S4

Siobhán McSweeney welcomes 12 new home potters to the competition to find Britain’s best potter, with master potter Keith Brymer Jones and Rich Miller as judges. This season’s challenges include making a 3D building and busts of musical legends, and shaping a carafe and beakers while blindfolded.

Battle On The Beach S1

Three skilled teams are on a mission to renovate identical beachfront properties in Gulf Shore, Alabama, in this reality competition series. Home reno experts Ty Pennington, Alison Victoria and Taniya Nayak are on hand to help, while judges Mina Starsiak (of Good Bones) and Mike Holmes (of Holmes + Holmes) pick the winners.

Behind The Story S5

Nomalanga “The Flame” Shozi takes over the interviewer’s seat from the lovely Pearl Thusi as she gets personal with some of the biggest names in South African entertainment. This season The Flame plays taxi driver as she picks up local celebrity guests and drives them around Joburg’s key sites and landmarks while holding intimate conversations.

In this reality series season, Faith “Queen Twerk” Nketsi focuses on her make-up business and on expanding her influencer brand, but lockdown restrictions have disrupted her plans to work with a Dubai-based brand company. Meanwhile Faith’s best friend Kim Kholiwe is caring for her new-born baby while dealing with baby daddy drama.

Below The Deck: Sailing Yacht S1

Meet the crews and the staff who make sailing a breeze for the pampered super rich and super bored. There are some familiar faces like Chef Adam Glick (Below Deck Mediterranean). Coming up, a drunken shipboard wedding, vegan guests, a baby on board, beach picnic, and a crash (whoops).

Former football star Terry Bradshaw, his wife, Tammy, and their 3 grown-up daughters, Rachel, Erin and Lacey, are coming out of lockdown on the ranch in this reality series. Coming up this season, the Bradshaws strut their stuff on game show Celebrity Family Feud, a road trip, and a Hawaiian wedding.

George Clarke helps enthusiasts who have big dreams to turn non-traditional spaces into architecturally intriguing homes. This season, a Victorian former bank becomes a home, a police station complete with holding cells has plenty of guest room, and even a dung filled barn gets a makeover.

BFFs Luke Caldwell and Clint Robertson (of HGTV house flipping show Boise Boys) renovate homes for families in Idaho who are growing up, expanding and changing, but don’t want to or can’t afford to move. It’s an issue they know about first-hand – Luke has 8 kids, while Clint has 3.

Estate agent Brittany Picolo-Ramos and her team buy and sell elegant and historic properties in New Orleans, with flair. Starting the season, Brittany helps a working mom to find the perfect uptown house that she can live in with her daughter and rent to tenants.

Away For Repair S1 (aka Sanparks Reality)

Actress Rami Chuene and life coach Romeo Mabasa host this 13-episode reality series in which they offer 4 teams of 2 people each some time away at a bootcamp in nature where they can work on repairing their relationships. They’ll get to visit 7 of SA’s most interesting National Parks including Mapungubwe, Tsitsikamma and Kruger.

In a new season of this series about glamorous modern traditional healers, Gogo Maweni needs to keep fighting for her place in society, while the new sangomas Sabelo (Mkhulu) and Pearl (Makalihle) Sifundza take on the difficult case of a client who claims to have been falsely accused.

Couples in committed relationships come together in the hope of working out the truth about a third wheel in their romance and getting closure. And yes, the “side piece” is there in the room with them, but everyone wants to have a mature and considerate conversation.

Investigators in this true crime series take us inside the first 24 hours on the case as they construct a timeline of a murder, work out the motive, and identify the killer. This season’s cases include the murders of Alan Helmick, Cassie Jo Stoddart, Josh Niles and Amber Washburn, and Menachem Stark.

In Pursuit With John Walsh S3

John Walsh and his team are on a mission to find missing people, whether they’re lost kids or fugitives from justice. This season he hunts down 2 men suspected of killing their girlfriends, Brian Ontiveros and Carlos Torres, along with child predator and sex offender Bill Brockbrader.

Using home video footage, this series shows us killers through the eyes of their friends, family and neighbours. From favourite uncles, to partners and families with big secrets, to the kids, anyone could be deadly. This season Dustin Wehde is murdered and framed in a neighbour’s callous plot to win a custody battle.