DStv has opened its Family channels to Access customers for a limited time only. Stay connected to DStv Access to enjoy these extra channels at no extra cost. 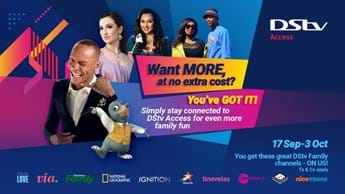 From 17 September to 3 October, DStv Family channels will be available for DStv Access customers to enjoy at no extra cost.

So stay connected to DStv Access to enjoy so much more entertainment on us! And if you love what you see, you can always upgrade to DStv Family to keep the entertainment going after the Open Window closes.

Here’s what you can watch during the DStv Family Open Window:

The reality dating series that makes you a fly on the wall is back! We follow single people on their blind dates, from start to end, including the “private” straight to camera comments the daters make about each other – and the fans’ comments online. Now double episodes!

Former corporate lawyer-turned- legal aid lawyer Marcie Diggs (Vinessa Antoine) starts the season with a tricky case involving a fired cop who killed someone with their car. We’ll also see 1 of her S1 clients return, this time on a murder charge!

Adventure chef Gordon Ramsay forages his way across the world, catching rattlesnakes in Texas, rappelling for shrimp in Puerto Rico, wrestling with conga eels in Croatia, scaling cliffs for butterworms in Mexico, and even baking bread in Iceland’s volcanic sands.

Siyabonga Mdlalose hosts this investigative show that gets to the bottom of real issues affecting the community, like fraud, intimidation, neglect, abuse and corruption. Siyabonga exposes the guilty on national TV, and achieves a resolution.

In each episode of this true-crime series, Doreen Morris introduces a case involving a missing South African. She talks to the missing person’s loved ones, and retraces their steps before weighing up theories about what happened to them.