Inside Teen Titans Go! | Watch it on DStv

Teen Titans Go executive producer Peter Michail takes us inside some of S7 most fun episodes, now on DStv 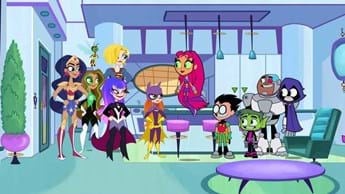 September is Go time for brand-new episodes of kids’ animated comedy superhero action series Teen Titans Go! And it’s a huge 7th season for fans. The Teen Titans are launching (literally) into space with the DC Super Hero Girls team in the 4-episode “Space House” special from Friday, 24 September, when both superhero teams “win” a holiday inside an orbiting smart house.

We’ll see the Teen Titans take on the world in their latest reality talent competition show in the grand 300th episode: “Next Top Talent Star: Dance Crew Edition” in early October. And there’s a lot more hilarity to come.

DStv spoke with the ultimate Teen Titans Go (TTG)! insider, series executive producer Peter Michail, about what kids can look forward to. And he slipped up some cool TTG! behind the scenes facts.

Tell us a bit about the starting point for Space House.

What was your favourite thing about having Batgirl and Robin in the same house?

Peter: The bickering back and forth, and having them showboating and trying to one up each other over who’s Batman's favourite. And to actually get to play with that character. She’s so iconic.

What did you do behind the scenes to celebrate your 300th episode?

Peter: We were all virtual at that time, so we got the crew together online. Warner Brothers was really nice and got us “300 Episode” crew jackets. It was a huge milestone for us. So it was too bad that couldn't celebrate in person.

What did you enjoy about Talia Perper’s storyboarding on that episode?

Peter: Talya is one of our strongest storyboarders on the series, and her dances were incredible. She went and did some research. She's a powerhouse.

Talya put Jabbawockeez’ (the real-life dance troupe) moves under the microscope for this...

Peter: Yes, yes, yes. And the Jabbawockeez’ inclusion in this is absolutely credit to Winston Seto, our Executive Director of Publicity. He's friends with them so they had met up and told him that they were fans of the show, and Winston told me “If you could ever do any anything with them…”

S7 introduces a new villain, PP Goblin (in episode 5). What was the reaction to that name in the writing room?

Peter: So adolescent, right? In the script he was the Pet Peeve Goblin. But once we started tossing ideas out, I forget which writer it was, but they just tossed the idea that let's just abbreviate his name into PP Goblin. And as silly as it sounds, it did get chuckle from all of us. It seemed about right for the Titans.

What's one of your pet peeves about working on Titans?

Peter: I do adore the show, but my pet peeve right now is probably working remote. Being in the room with the artists and collaborating in person does feel different. And I would always love more time to work on the episode.

You have an episode that is all about that this season: “A Little Help, Please” (episode 6)?

Peter: That one specifically came from one of my animation directors who told me, “Hey, can you just stop writing massive, epic episodes? It's just taking a lot of time.” And I said, “You're right!” Then once we started really thinking about what kind of episodes we could do, we couldn't actually think of anything. And we were like, “But what if that's the problem! They (The Teen Titans) get a distress call from the TTG! crew, and they just need to tone it down. That way we can actually avoid walk cycles or lip syncs.

What can fans learn about the TTG behind the scenes process from watching that episode?

Peter: That it’s a lot of work! Just going to new locations that somebody has to draw, design, clean up, and paint. It takes time to animate a character walking or lip sync, just having them move their lips to the words. I know when I was a kid, I just thought it was magic. I didn't really think it was a bunch of people just labouring to make this happen. And I very much enjoyed the irony of having them float instead of walk, but then all the limbs come all over and it’s just a big old mess and much harder to animate, which actually does sometimes happen by accident in animation when your pivot points are put in the wrong spots. The program goes crazy, so it was fun to do it intentionally.

How did you get Marv Wolfman (original creator of DC Comics’ New Teen Titans) and George Perez (the comics’ artist) to appear as animated versions of themselves in episode 7 and 14?

Peter: They created this playground for us! So we had these ideas and pitched to them. They were on board immediately. They thought it was really, really fun. Marv was a fan of the show, I don't think George had seen it before, but they loved the premise of the episode. I love that they actually voice their characters. It was nice to actually pay tribute to them. It was a love letter to them and a thank you, and the episode came out (in the US) on the 40th anniversary of them creating Teen Titans as we know it.

What did you think of the character designs for them?

That's Junpei Takayama. That guy's a genius. I think he nailed them, especially Marv. People were complaining a little bit online that George didn't have his iconic Hawaiian shirts, but that's a lot of animating patterns, it’s a little difficult. So we simplified. But we sent us designs over for approval and Marv and George loved them. It's always fun to actually draw our real person.

Cartoon Network is available on DStv Premium, Compact Plus, Compact, Family and Access. To upgrade your existing package, click here.