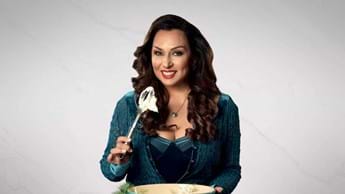 Dance Africa Dance unites Indian music and African dance in a dazzling new competition series, while South Africa gets competitive in the kitchen, too, in a brand-new season of cooking contest Aansit. For more local flavour, Heléne Lombard invites you into her home in Boerediva, while Marliza van den Berg gives us a taste of the Garden Route in Op Soek Na Eden.

DStv Family explores deep inside culture, community and family in new seasons of Isencane Lengane, Mamazala, Vergewe My and S’khipha Amafiles, while Doreen Morris is back looking into missing persons cases in Vermis.

And it’s all about local love and romance in Bruid-Boetiek and Single & Mingle.

Home is where the heart is, on DStv Family this September.

A taste for travel

This cooking competition. Homecooks compete in teams of three to prepare lavish, restaurant-quality 3-course meals for Reuben and his guest judge, with a tasty cash prize on offer.

Journalist Marliza van den Berg takes us on a tour of her new, adoptive home: South Africa’s Garden Route. In each episode, she will show us a different facet of the region, allowing viewers to experience everything on offer, from food to views to nature.

Thando and Siyacela married at the age of 15, and we follow the results of that choice in this stressful reality series. This season, Thando continues to work hard at her studies, while Siyacela obsesses over polygamy, and the Dlamuka family bicker over inheriting even as ailing father Dlamuka lives and breathes.

Host Dingaan Khumalo plays facilitator, peacemaker and negotiator as he reaches out to help families in crisis with the in-laws. It’s all about promoting love, respect and healthy communication. Starting the season, a woman wants her in-laws to give her an item that she believes will help her to conceive.

People who’ve hurt their family members and others in their lives are given the chance to ask for forgiveness. A negotiator helps everyone to talk things through, and survivors of serious crimes reveal how those actions impacted their lives.

In each episode of this true-crime series, Doreen Morris introduces a case involving a missing South African. She talks to the missing person’s loved ones, and retraces their steps before weighing up theories about what happened to them.

Siyabonga Mdlalose hosts this investigative show that gets to the bottom of real issues affecting the community, like fraud, intimidation, neglect, abuse and corruption. Siyabonga exposes the guilty on national TV, and achieves a resolution.

And just for fun

Designer Diaan Daniels invites us into his exclusive bridal boutique where, in each episode, two brides-to-be swing by to try on different dresses. In the season premiere, a bride arrives to pick up her dress following an 8-month wait!

The reality dating series that makes you a fly on the wall is back! We follow single people on their blind dates, from start to end, including the “private” straight to camera comments the daters make about each other – and the fans’ comments online. Now double episodes!