A “Miraculous” new season & movie, and robot space stories on DStv’s School of Laughter this week 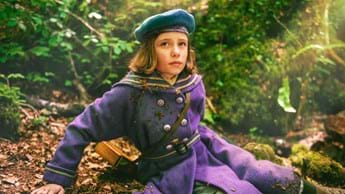 DStv has 13 fun, kid-friendly channels ready to entertain and educate every day, with new shows, movies and episodes every week.

This week’s kids’ movies are blend of a classic and modern adventure: Miraculous World: Shanghai, The Legend of Ladydragon on Disney Channel (DStv channel 303), and The Secret Garden on M-Net (DStv channel 101).

Then loads and loads of new episodes and seasons start this week, too, with DaVinci adding new educational series Addison, Cubs, and Kosmix S1.

And there are all-new episodes for those car-bike-train-plane-crazy kids when Thomas And Friends S18 and Ricky Zoom S2 begin.

Secret superhero Marinette Ladybug is enjoying her school holiday until she learns that her friend Adrien had to go to Shanghai, China, with his father. Luckily, Marinette’s Uncle Wang lives there, and she embarks on an Asian adventure!

The adventure in Paris continues for Ladybug and Cat Noir, who’re surrounded by new allies and fighting ever more powerful and determined opponents as great changes await them.

Funny, adventurous, and playful. In each episode, 7-year-old Addison and her friends try to figure out what’s behind the latest neighbourhood mystery. They never give up, always stick together and are not afraid of anything.

Cubs is a unique collection of short films that tell the bedtime stories of some of the most adorable and mysterious animals, from elephants and whales, to kangaroos, flamingos, platypuses and bees.

Little robot Kit tells stories about his journey to the end of the galaxy and back to Earth. But the universe can be a dangerous place and Kit often gets in trouble.

Meet Ricky. Built for speed, he’s a little red rescue bike who shares his experiences with his loyal Bike Buddies Loops, Scootio and DJ. This week, Loops is jealous when Ricky gets a newer model VroomBoard for his birthday than the 1 that Loops has.

This popular series follows the adventures of Thomas The Tank Engine and all of his engine friends on the Island of Sodor. In S18 one of the bigger engines teases Edward for being old and outdated.

Destiny, Matteo, and Finn are back for more home-away-from-home adventures! In new episodes it’s the first day of a new summer at Kikiwaka Camp and Ava is excited to see everyone.

In S2, Peg and Cat must impress a judge during a singing competition, plus the President of the United States summons Peg and Cat to solve a problem of national importance: Strange signals are coming from space, in a pattern!