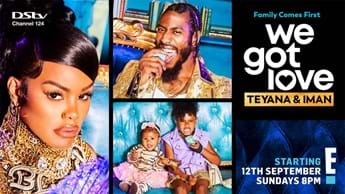 We Got Love Teyana & Iman is an authentically and unfiltered new docu-series that follows pop culture powerhouses Teyana, Iman, and their daughters Junie B, Baby Rue and their tight-knit entourage of family and friends. The series gives unprecedented access into Teyana and Iman’s lives together, never-before-seen in a celebrity docu-series until now. Teyana and Iman have built an empire but they’re not done yet. They have major goals and high ambitions, but they’ll never lose sight of what’s really important, family.

Teyana “Spike Tey” Taylor’s perspective of film is far beyond the expertise of only being in front of the lens. The entrepreneur mindset of the Harlem-born singer, dancer, actress, and choreographer has produced a career with her own authoritative order.

Teyana is the essence of a renaissance woman. She executive produced her #1 charting RnB Billboard album, THE ALBUM, and served as creative director and choreographer to several sold out tours. She also launched a MAC Cosmetics collaboration curated and designed by herself.

Her multifaceted talents as an entertainer, visionary and creative continue to open doors. Teyana has choreographed for Beyonce and turned Kanye West’s Fade into a viral sensation. Her highly sought-after creative eye led her to creative direct for brands such as Adidas, Reebok and Jordan Brand.

Teyana’s unstoppable talent behind the lens also awarded her BET’s 2020 Video Director of the Year. She’s since launched her all-female production company, The Aunties Inc. to help artists like herself find their full creative potential. The Aunties Inc. has already produced and directed for the likes of Wu-Tang, T.I., Meg Thee Stallion, Big Sean, Macy Gray, Iman, Monica, and more.

Teyana is also credited in film and television for her lead roles in Hit The Floor, Star, Honey 4, and Coming 2 America to name a few. Taylor’s main contribution in the industry is to produce work that is authentic and shift the narrative of being a traditional artist and filmmaker.

He was drafted #17 by the New York Knicks in 2011 and played four seasons for the team. He went on to win an NBA Championship with the Cleveland Cavaliers and play for the Houston Rockets, Sacramento Kings and Brooklyn Nets. Known by music fans as Iman, he has made his own path to musical respect with his high tempo flow and personal lyrics as seen in his most recent musical release "Joyride."

In addition to writing lyrics daily, he continues to work on various musical projects and build his record label, A Sinner's Peace. Iman surprised fans by appearing in BET's hit show TWENTIES last season and will be acting in a few additional television shows this fall. He also won an EMMY for his participation in the MSG Network show BEGINNINGS. Fashion and design is how Iman expressed his creativity while growing up outside of Chicago in Oak Park, Illinois in the 1990's.

He has now grown from wearing and modeling clothes to designing his own clothing brand called Centerpiece. Iman wants people to be inspired to become the centerpiece of their family and their own life.