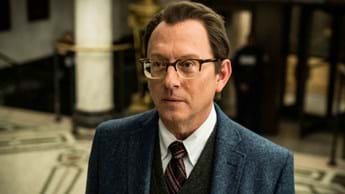 Classic sitcom lovers, wait ’til you see who’s visiting in the final season of Last Man Standing, then get into a brand-new uplifting story in B Positive.

Sunday 8pm movies are back on M-Net (DStv channel 101) including the brain-and-time-twisting sci-fi action film Tenet, Jude Law’s psychological thriller, The Nest, and our favourite prehistoric family returns in The Croods 2.

And the biggest news for local lovers this Heritage Month is the start of the second season of Legacy. With the first season finale falling late in the month, we’ll experience all the thrills of a high-drama wedding and a telenovela classic push-and-fall situation.

S1 of this local telenovela ends with one of the Price women shoving the other over a balcony, and a runaway bride situation that has a family up in arms. As S2 begins, Petra’s brother, Stefan, returns, one of the Price sisters has visions of Sebastian, and at another man’s funeral a mother tells her son that Sebastian Price was his real father…

First-time prisoner Mark Cobden (Sean Bean) is out of his depth when he meets scrupulous prisoner officer Eric McNally (Stephen Graham). But Eric’s dedication to doing the right thing is threatened when one inmate finds his Achille’s heel, leaving Eric to choose between his job and his family’s safety. Written by Jimmy McGovern (Cracker).

This crime drama series based on Pekka Hiltunen’s Studio book series (2011-2019) follows Mari and Lia, two young Finnish women who meet in London when they get involved with The Studio, a top-secret group of people who target those whose money, power and connections put them beyond the reach of the law.

Remake of the 1980s series about ex-Navy SEAL Magnum who works as a private investigator in Hawaii. This season, Magnum’s partner, ex-MI6 agent Higgins, gets a boyfriend, there’s a guest appearance from Roger E. Mosley (the Original TC) in episode 5, and watch out for the white SUV stalking Magnum and Higgins.

Police procedural series focussed on the Reagan family of cops, led by Frank Reagan. The season opens with Frank clashing with City Council Speaker Regina Thomas (Whoopi Goldberg) over protests around police racism and brutality. The Reagans will continue to struggle with the damaged relationship between police and the community throughout the season.

Police procedural focussed on the Naval Criminal Investigative Service in Los Angeles. The season starts with a catch-up on how everyone’s been doing since the outbreak of the COVID-19 pandemic. Deeks trains to become an official NCIS agent before going on a secret mission for Hetty, Kensi’s stalker gets in touch, and Callen is accused of being a Russian agent.

Police procedural centred on a Special Weapons And Tactics unit and its interactions with a predominantly African-American community. The season starts just before the COVID-19 lockdown, with the team chasing Jihadists and a drug cartel as Hondo and his father discuss the clashes between the LAPD and the community in 1992 following the Rodney King verdict.

High-profile criminal Red Reddington helps FBI profiler Liz Keen to catch crooks, claiming to be her father. As S8 begins, Liz and her mother, Katarina Rostova, continue their pact to uncover Red’s identity and, thanks to their actions, Liz will end up on the run, on Red’s Blacklist, and plotting to take over his criminal empire.

Series creator Marco Pennette (co-creator and showrunner of Ugly Betty) based this sitcom on his experiences surviving a kidney transplant in 2012. Drew (Thomas Middleditch), a divorced therapist with a rare blood type, reconnects with a woman from his past, Gina (Annaleigh Ashford), who’s a donor match for his kidney transplant.

The final season of this family sitcom starts with several time jumps. Mandy, Kyle and their 3-year-old daughter, Sarah, move in with the Baxters during the pandemic, and Kristin and Ryan also have a young daughter. You’ll be seeing double during a visit from Tool Man Tim Taylor (Tim Allen’s character from Home Improvement) in episode 2.

Inception meets Memento in Chris Nolan’s latest time-tampering sci-fi movie. An unnamed CIA agent is sent undercover to recover a strange artifact, only to be brought onboard a top-secret agency called Tenet, where he’s charged with tracking down objects that defy the order of time. With John David Washington and Robert Pattinson.

Psychological thriller. Entrepreneur Rory O'Hara moves his family from the US to the UK, where they start living an upper-class life until the truth about Rory’s fly-by-night finances slowly comes to light, challenging family loyalties. With Jude Law and Carrie Coon.

Action thriller. 4 school shooters stage a co-ordinated attack complete with bombs and a live stream of the massacre. As the school goes into lockdown and the media picks up on the slaughter, 1 student works to outfox the attackers. With Thomas Jane and Radha Mitchell.

Animated family comedy. Cavemen family The Croods are looking for the perfect place to call home after their previous cave was turned into a lava field. And they just might have found paradise, but as it turns out, it’s already inhabited by an “advanced” family called The Bettermans.