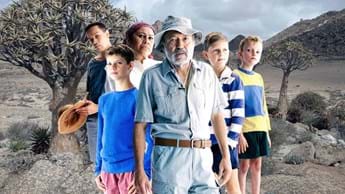 DStv loves a taste of local, and there’s always room in the pot for more flavour.

kykNET (DStv channel 144) kicks things off with their newest local drama series, Nêrens, Noord-Kaap, which veteran actor Frank Opperman plays a widowed farmer in the Northern Cape who’s estranged from his three sons. Based on the award-winning play by Nico Scheepers.

VIA (DStv channel 147) brings us a brand-new lifestyle cooking show called Boerediva with the fabulous actress Heléne Lombard. And local designer Diaan Daniels is also back helping brides in S2 of Die Bruid-boetiek.

Episode 5 of the African Original Crime Drama Reyka is a must-watch on Sunday, 29 August, and there are more weekend treats in store with 2 local TV movies – Umhlukanisi and Blessers – on Mzansi Magic (DStv channel 161).

Based on a play titled Nêrens, this drama follows 3 estranged brothers – Andries, Frans and Ronnie – as they find the winding road back to their parents’ farm, Nêrens, where secrets, sadness and the truth about their mother's death stand in the way of salvation. With Frank Opperman, De Klerk Oelofse, Geon Nel and Albert Pretorius.

Designer Diaan Daniels invites us into his exclusive bridal boutique where, in each episode, 2 brides-to-be swing by to try on different dresses in the hopes of finding the perfect outfit for their wedding day. In the season premiere, Daniel must convince a bride that sleeves on a gown aren’t for everyone, and a woman arrives to pick up her dress following an 8-month wait!

The police target Soda as a prime suspect in the serial killer case, and he flees for his life – is he an innocent scapegoat or a ruthless serial killer? Meanwhile, the Tyrone family experience a harrowing incident in the dead of the night. Is it a housebreaking or a contract hit? Reyka and the police start to piece together links between this event and their cane field killer case.

Dineo finally reaches Felicity but it might all be in vain, Sanele finds himself in a precarious position and no one is coming to his rescue, and when Felicity’s desperate attempt to rid herself of James fails, she turns to the 1 person she can trust completely.

Puleng is in hot water when Mandla finds out her secret, Phakade betrays his father when Ace takes him under his wing, and the Nondumo aunts arrive to crack the whip. Mandla learns the shocking truth about his wife, and Phakade saves NJ from a dangerous situation.

Gladys tells Thathi that she has forgiven her and tells Melusi that there will be no divorce. Bongani is startled when he finds Don waiting for him at the Shisanyama, and MaZet brings in a secret weapon to get rid of Don.

Work forces Gabriel and Abednego into each other's space. Sophie starts feeling the heat as people get wind of her lies. Lesedi finds out about Zakwe’s father, and Esther and Makwande reconnect – much to Mncedisi's dismay.

After 7 years of marriage, a domestic worker finds herself falling in love with her boss. Her husband finds out about it and manipulates her to rob the man and his family who she has grown to love and respect.

A chaotic South African dramedy in which a powerful, middle-aged CEO and his family, who have expensive recreational habits, learn the hard way that their choices have consequences.

Catch it on Showmax

In episode 2 of this reality series, the couples reunite to make their first date selection. MJ stands up for the woman he loves when Nthabi butts heads with the single girls. Sifiso flirts with Palesa, while Ceejay keeps his word to MJ about Nthabi.

Watch on Thursday, 2 September on Showmax

In this local film, Natalie flees after her disastrous wedding leads to an accidental death. After she reunites with her rebellious best friend, Poppie, who is heavily pregnant, the 2 young women escape together on horseback across the endless winter landscape. Starring Nicole Fortuin and De Klerk Oelofse.

Watch on Thursday, 2 September on Showmax