It’s all relative in Family Law and American Housewife and more, this week on DStv 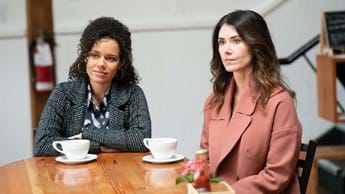 From our family to yours, enjoy the best of international series on DStv!

Juicy Universal TV (DStv channel 117) Canadian legal drama series Family Law focuses on a prodigal daughter fitting into her step family. While in the final season of sitcom American Housewife, stay-at-home-mom Kattie Otto has to wrestle three children through home-schooling. And it’s time for a final adventure between grandfather and grandson in the special final episode of S5 of Rick And Morty on the online streaming platform Showmax.

Recovering alcoholic lawyer Abigail Bianchi (Jewel Staite) starts working for her estranged father, Harry Svennson (Victor Garber), at his Vancouver law firm, along with her half-siblings, as per her probation stipulations.

In this comedy’s final season, we’ll see how home-schooling launches Katie into the mommy vlogging world. And we get a fascinating perspective on the Otto household in the series’ 100th episode, thanks to Franklin’s podcast.

In the final hour-long episode of this animation series, Rick and his grandson, Morty, have a fall-out and Rick considers cutting Morty out of his life. This has some far-reaching consequences, and we’ll have to see whether they reconcile and set their differences.

Watch from Monday, 23 August on Showmax