Strong women onscreen and on set! Four actresses tell all 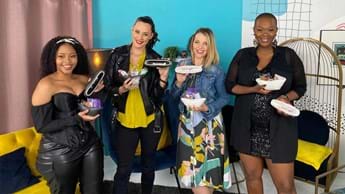 DStv’s screens are filled with women who lead the story this Women’s Month, from the Price women who’re on a quest to take down power-hungry abusive husband James in Legacy, to MaZet (Siphesihle Ndaba) in Gomora, strategically navigating her way through a deadly power struggle, to Detective Cebekhulu (Zikhona Sodlaka) who had people jumping and saluting when she recently stepped onto the scene in DiepCity.

Since one of the best ways to celebrate Women’s Month is to listen to what women have to say, we asked four of South Africa’s leading Actresses – Zikhona Sodlaka, Nadia Beukes, Siphesihle Ndaba & Jay Anstey – about bringing women to life onscreen and behind the scenes.

Curious about what else they had to say? Keep reading.

Who is she, why do we think she’s strong, why does she have to be strong, and if you’re writing a story, what’s her job?

Siphesihle: It's a bit outdated. I feel like there's this notion that women have to be strong. You know you're strong, you're resilient. But why do women have to be resilient? Why is my identity tied to being strong? Why can't I be soft? Why isn't vulnerability strong? If a character can be vulnerable, and can show that side of themselves, that is strength to me.

Jay: I really felt for my whole life that I had to be hard to be heard. And then I met an amazing guy who was like, “You don't always have to do that. You can breathe.” And I was like, “Oh, this is nice.” It takes a lot more strength to be vulnerable than to be hard and to block out things. Just to experience and feel everything, that's really hard.

Zikhona: In the story, I would like females to be written exactly as they are: Just as a woman. That's it. Because then I can come in and offer her whatever version of strong I think she is. Strength is a woman's birth right. When you are born female, you are strong in whatever version it is, whether you wear pink, or black, whether you cry out loud or you don't, whether you have no hair or you have long hair. Every woman is strong and soft enough.

Nadia: If we're looking at scripts and stories, I think it's if the female gets the opportunity to make choices, and not to judge those choices. The story is not dictated by circumstances, she actually makes a choice. Jay, I related to your Inconceivable character, speaking about vulnerability! She had to make certain choices about her baby, and the character justified their choices, whether you as a viewer agree with it or not. That's part of the viewing pleasure. That's where the conversation starts growing. It's not so black and white. But that opportunity to choose, I think, is what defines a strong character.

She’s got the power

Zikhona: I was coming in (to DiepCity) to play the detective role alongside only male detectives and male directors. The direction (for the character) was very male and stern. And you just have to gracefully say, “No, we are not like that.” This is a woman. She may be in a shrewd industry. She may need to shoot someone. But she won't instinctively always be the one doing the nasty work. I have made that decision to just make her extremely female, not to mirror the male energy that I have playing alongside myself on the set. I have to take a moment to step on the side and go, “Is this the moment where I think a woman would come in hard? Maybe not.” And I noticed that you need to grow to that point. The privilege doesn’t come all the time. Male actors don't need the confidence to get there. Two years’ experience, he could already be having a chat. But when you do it as a female, it’s “You’re new. You're two years into this. You don't have no stripes! You’re difficult”. As a woman, you need to understand that you will be called difficult…

Jay: I love working with Kgomotso Christopher (Dineo in Legacy). Seeing her now, I crush on her so much. There’s no apology needed. She’s not cruel on set but everybody just naturally respects her. So she'll say, “No, this is not how it's gonna go,” and you just go, “Okay, Mama, that's fine.”

Jay: We love to work with those sorts of legends. Like Michelle Botes (Angelique in Legacy)

Zikhona: I want her to marry me.

Nadia: Then with Marisa (Drummond) as a director, what's nice about her, especially with sensitive scenes, is she just respects you and the scene, and she takes the time to connect and create the environment. She's got kind of an intuition, that emotional intelligence that just works so well. It just makes everything comfortable.

Jay (to Zikhona): Do you have female directors on your set?

Zikhona: No, not yet. But I just walked in there. I’m new on set. (DiepCity’s female production staff includes executive producer Annelie van Rooyen and head writer Duduzile Mabaso). But the leads are four young women, so I’ve just come in there and become the big sister. I'm just like, “No, baby. That's not how it works. This is an emotional scene.”

Siphesihle: We were (her and Jay) literally just talking about this! The noise on set is just insane. It could be an emotional scene and somebody is like “Gaffer, gaffer!” And then you're just like, “Bro!”

Zikhona: Maybe in film school it must be said that there is a sense of emotional intelligence that you need to have. There's just a tenderness to a set that is there because we work in an industry of magic to create things that aren't there. That magic sometimes comes easily and sometimes it doesn't. And for those that need a little bit of time to get to that magic, they need to be able to access that, whether male or female.

Nadia: I think the most important thing is that grace, because as soon as you start being loud and trying to have a masculine energy, it doesn't translate well because people immediately judge you and say you are bossy, or you are being horrible. You've got the knowledge, you've got the experience, you know what you're doing. Most women that I've worked with, if they are just themselves, it translates very well. The whole industry is more open to it than we think.

How to watch your favourite telenovelas online