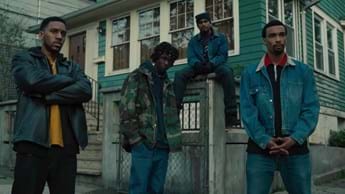 Docu-drama series Wu-Tang Clan: An American Saga explores Bobby Diggs’s efforts to create a way out of crime through music. And the new season of doccie series Intervention will make the hairs on the back of your neck stand up.

There are three new competition-based series: The Bridge UK challenges 12 strangers to build a bridge to an island where a load of cash is stashed. Things gets sizzling in Grill of Victory as contestants compete in a backyard braai competition. And new game show The Wheel With Michael McIntyre brings back one of our favourite shiny floor hosts for a little kooky fun.

And if you’re looking for something a little more down home, renovation expert Cristina Haack is back in Christina On The Coast S3. All this and so much more to explore…

12 strangers come together on the banks of a picturesque lake in the British countryside, where they are challenged to work together to build a bridge to an island where the prize money is located – but who gets the cash?

The Wheel With Michael McIntyre S1

Funnyman Michael McIntyre hosts this game show in which 7 celebrities help contestants to answer questions on their way to win a fortune. A spin of The Wheel decides the celebrity helper.

In early 1990s New York, Bobby Diggs strives to unite a dozen young black men who are torn between music and crime. They will eventually rise to become the unlikeliest of American success stories.

In this emotionally gripping reality series, addicts confront their darkest demons and hopefully find a route to redemption. In episode 1, Susan escaped her Mormon family in Las Vegas, but now her heroin addiction has forced her to move back home.

The team head out on a special mission in West Virginia’s Tygart Valley that former member Trapper set up for them before his unexpected death. Equipped with his journal, they go on their wildest adventure yet.

Christina On The Coast S3

Expert home and garden designers take a tour through some of the most awe-inspiring properties you’ll ever see. In episode 1, we see a home inspired by mountain lodge living, and a garden set up for parties.